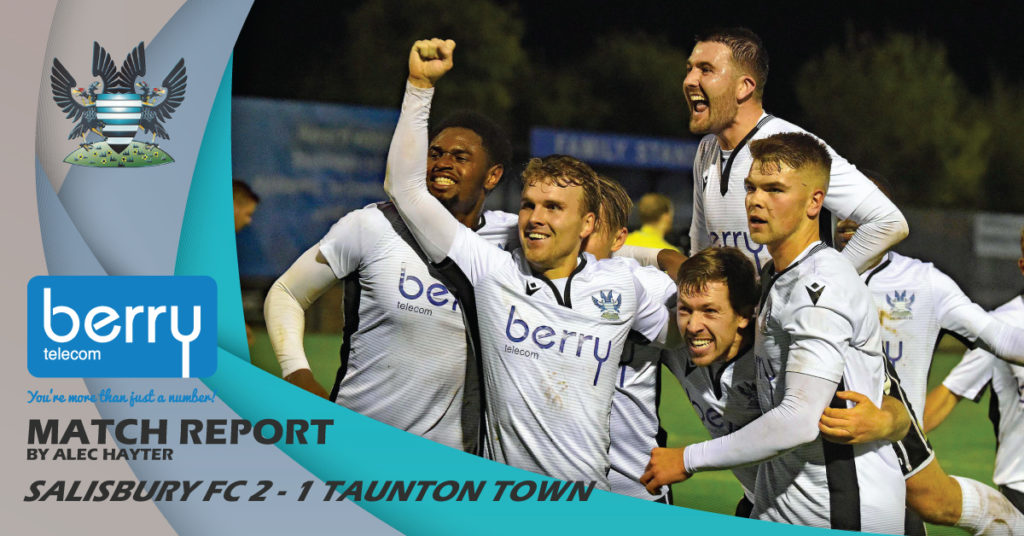 Games between these sides are always intense, tight affairs, and this one was no exception. Some things don’t change, and in particular the gamesmanship on display and on this occasion Taunton were the architects of their own downfall, with the Whites taking full advantage. There is some kind of poetic justice when the main perpetrators of unwelcome actions affect the outcome, and this was the case as both Lloyd Irish and Matt Wright will have reason to reflect upon their respective contributions, although Irish excelled with a late, late save from Lewis Benson to keep the score at 2-1.

Early, decisive action from officials might have improved the spectacle as far as onlookers were concerned, but at the end of the day this was a three point gain for Salisbury where perhaps a draw would have been a fairer result. I’ll take that with both hands, with the additional thought that in spite of of losing Josh Sommerton early on, the defence and also the midfield withstood most things that the Peacocks threw at them and in the latter stages the assured handling of Gerard Benfield saw to it that after Taunton grabbed a goal back, that was all they were going to get.

Although it seemed that the visitors had more of the possession in the first half an impression formed by Whites’ fairly sluggish start, in the cold light of day each side produced three chances of note. On 13 minutes the impressive Andrew Neal cut in from the left and fired an effort which fell awkwardly in front of Benfield who gathered it safely, and 5 minutes later, the equally impressive Dan Sullivan saw his snapshot saved by the keeper. In the bright opening for Taunton, 4 minutes later it was Sullivan again who fired wide after the ball came to him from a clearance.

It took a while, but the end of the first half proved fruitful for the Whites as Lewis Benson strode towards the Taunton area, and as their defence obligingly parted in front of him, he hit a firm attempt which was deflected over the bar. A few seconds later Benson’s ball across the box was just missed by Toby Holmes and Nathanial Oseni but shortly after the first signs of playing out time by Taunton keeper, on 44 minutes, were probably the Peacocks’ undoing at the break. Another vicious searching cross from Benson may have taken a slight deflection which panicked the keeper into urgent action at his near post, but all he could do was deposit the ball into the net for what must be a rare error for him.

In a game like this any lead is a good one, if not necessarily a secure one, and thus it nearly proved straight after the restart when on 47 minutes Neal was given an opportunity from a throughball but disappointingly missed the target from 15 yards, but Salisbury then responded after relative chaos in the visitors’ defence, resulting in an off-balance Bay Downing disappointingly launching the ball over the top from close in.

The to and fro continued, but it was not until 22 minutes from the end that what ultimately turned out to be the decisive blow was dealt and, as often happens when strikers are asked to defend, Wright obliged with an own goal, although it has to be said that once again Benson’s delivery from a corner was aimed superbly and made it very difficult for the striker to avoid sending the home crowd into ecstasy.

Taunton are a very good side and in my opinion have changed their style, and it was no surprise when they reacted, as good sides do. Three minutes after they conceded the second Sullivan provided a superb cross which ex-White Ryan Brett stooped to head on target from close in, but Benfield pulled off a tremendous save to deny him, and, incidentally, start the keeper’s best and most confidence boosting period of the game. He stood no chance, however, on 83 minutes when the ball fell to Neal who couldn’t really miss to start the nerves jangling.

There followed perhaps one of the most heartening aspects of this win for Manager Steve Claridge that, from that point in particular, but throughout the game in general, his side held firm. Not only that but they also produced late chances, with Aaron Dawson’s drive from the edge of the box being kept out by Irish on 85 minutes and then Shaquille having another effort blocked.

The last word however was with the visitors’ keeper after Shaquille played an inviting square ball to Benson whose fierce shot on target was brilliantly kept out by the advancing Irish.

If this win does not boost the confidence and lead to more consistent performances then I’m at a loss to think what might. It has to be said that an unchanged starting eleven from the Hendon victory must surely have had something to do with it. This result must also be put into the context in that Taunton are a far better outfit that Hendon, so there is a good trend starting.

Everyone must surely hope that progress is maintained in a game against different opposition on Saturday when Harrow Borough visit. It will be time to banish memories of the last the game of last season, but ex-Isthmian league teams such as Harrow always seem to pose problems for the Whites. Real progress will be evident if those difficulties can be overcome.

I’m aware that some of our regular supporters decided to stay away from the Taunton game and can only say that that was their loss! Please ensure that you resume your normal service by coming to the game on Saturday and of course returning to the Ray Mac again seven days later for the FA Trophy game with Dorchester Town, even if you cannot make it to Merthyr next Tuesday.