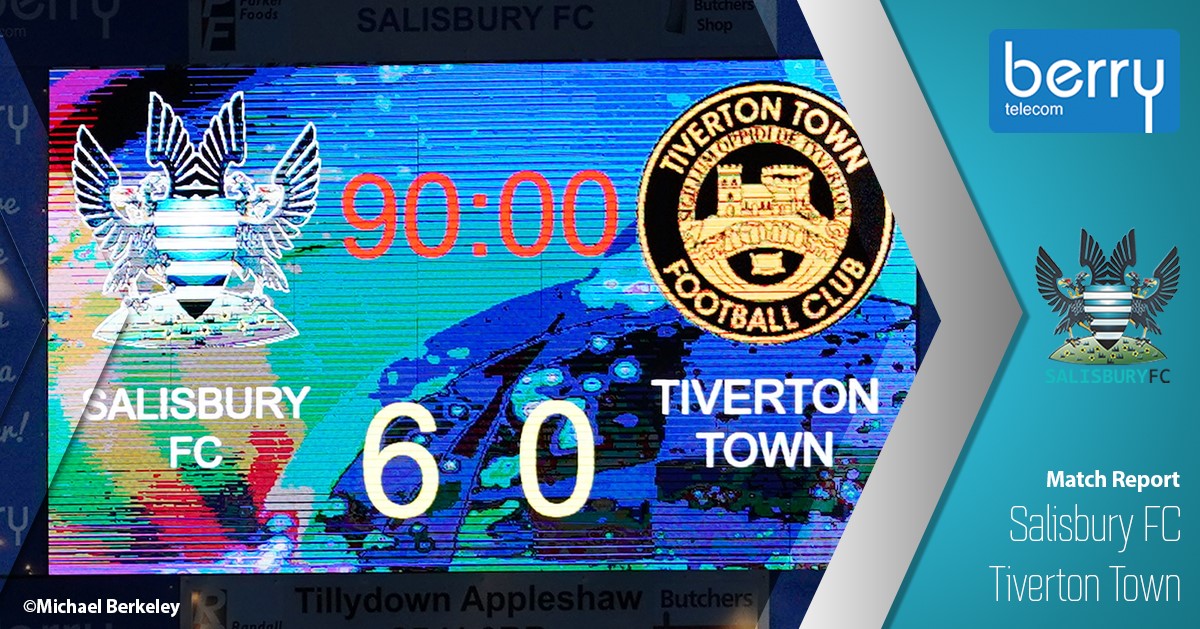 A Halloween spooktacular saw the Whites show their ruthless dark side and left Tivvy in a tizzy with a 6-0 thrashing.

In spite of a cracking win on Tuesday against Weston-super-Mare, I heard that some still bemoaned the fact that we had scored only twice, but surely they would have been satisfied today. I heard also that the Tiverton team coach didn’t turn up, but of more importance is that the way Salisbury played didn’t allow the Devon side to turn up either.

Yes, the visitors were forced to play for 85 minutes with 10 men, causing Manager Martyn Rogers to comment afterwards that the result was all his team’s fault, without really trying to use the early sending off as the reason for defeat. As Manager Steve Claridge told me afterwards “Against 10 men you make the game as hard as you can for them – if you do it right, and against a good side we didn’t settle for 3, 4 or even 5 goals. We were very good today.” The team certainly did it right.

After only five minutes Louis Morison saw straight red after kicking Lewis Benson on the ground, with the Assistant flagging furiously although play had moved towards the other end. After consultation referee Craig Scriven took the only course of action he could.

Lesson one – how to ram home your advantage. The resultant freekick was a curling left foot delivery from Antonio Diaz which saw Charlie Kennedy get among the defence and power home a header – a double whammy.

Lesson two – shortly afterwards, the Whites had doubled their advantage when the energetic Harry Baker chased down a pass to the right bye-line and whipped the ball low across goal where Diaz was on hand to do the rest.

Doing what Matt Tubss used to, and bearing an uncanny resemblance as well! ©Michael Berkeley

Nothing was seen of the Tiverton attack and in fact it took until the 68th minute before they had their first shot on goal. It was already almost a case of damage limitation after only the first quarter of the game but even that nearly failed on 25 minutes when a good ball found Dominic Jefferies in space. Jefferies controlled the ball superbly but could not finish the job, his attempted chip hardly troubling keeper Lewis Williams. Later, Jefferies was to crown a fine display with a cracking goal, so he’s forgiven!

Jack Ball had a headed opportunity five minutes before the break from another Diaz delivery, but could not direct the ball on target, and on 43 minutes Marvin Brooks combined with Diaz, getting the ball back before seeing his right foot effort saved, but it was only seconds before the third goal arrived.This time it was a Lewis Benson free kick delivered into the danger area, giving Kennedy his second goal with another towering header.

In the press box I’m sure I heard some of what was going on in the Tiverton dressing room, but whatever was said could not prevent Salisbury’s fourth goal which came on 46 minutes. This was an absolute peach of a strike from Jefferies after Baker laid the ball back to him. The young midfielder went along the edge of the box before curling a superbly aimed finish into the top corner.

Two goals in the space of three minutes’ play therefore, albeit split with the half-time break, and maybe the players would have been forgiven for easing off, but no, on 53 minutes the Whites grabbed their fifth when Warren Bentley, who entered the fray at the break, played a measured pass to Baker who calmly slotted home having evaded the keeper.

On 68 minutes Alexis Andre, who had been a virtual spectator until then, was woken from his slumbers when Jordan Bastin had a chance from about 8 yards out, but the keeper proved himself to be fully awake with a regulation stop.

The game was beginning to look like a training session, but on 76 minutes another quality strike, to rival Jefferies’ earlier effort, saw Bentley on the edge of the box turning on a sixpence and belting the ball into the top corner before the keeper could move.

A few seconds later Tivvy’s second only effort on goal arrived but that was a wild Dan Hayfield right foot effort from distance.

The crowd were shouting “we want seven”, and they nearly got what they wanted right on the stroke of time, and it would have been great had Yemi Odubade could have crowned his debut with a goal, but keeper Williams denied him after Bentley had played an inviting ball into the box. The keeper did well to block but the ball went away from goal and onto the right foot of Jefferies whose venomous drive just missed the upright.

Cara Glass chose Jefferies as the Man of the Match, but in all honesty the accolade could have gone to any of those who took the field. In this mood the Whites have no reason to fear many, if any, in the league, and on Tuesday Gosport Borough are due to feel the heat.

It’s a sobering thought that it seems likely that this will be the last home game due to a Covid lockdown until early December – a bit like hearing an unwelcome half time whistle when you’re well on top. Best book your tickets early and get along to the Ray Mac so that your team can give you some more good, lasting memories.