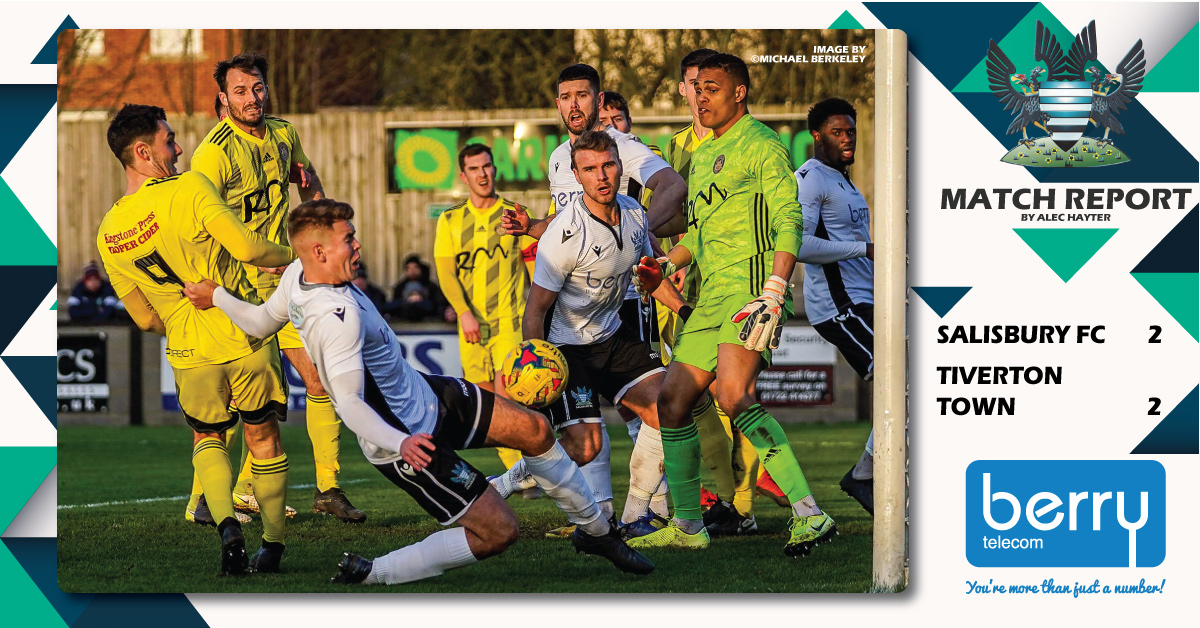 It may seem obvious to say that as a result of the draw with Tiverton Town the gap in points between the clubs hasn’t changed, but it was obvious to most of the crowd that there was a gap of a different kind – that between one team who made, as manager Steve Claridge would say, “chance after chance”, and the other who profited from what looked to be an incorrect refereeing penalty decision in the early stages of the game. Tiverton also benefited from an uncharacteristic error by Salisbury keeper Marcus Beauchamp which presented them with a goal completely against the run of play, as was their second only five minutes later. It says a lot for the home team that they came back strongly against a stubborn higher-placed side to earn a point which was the very least they deserved.

That the Whites did not capitalise on the chances they made was in part due to some desperate defending, including goal-line clearances, and not least the woodwork which seemed to grow in size as the game went on. In the whole game the visitors only produced five or six efforts on goal but, tellingly took two of them.

Salisbury had the first opportunity when visiting keeper Rhys Lovett miscued a clearance that reached the halfway line from where Lewis Benson tried an ambitious lob which the keeper managed to keep out of the net.

On 16 minutes Shaquille Hippolyte-Patrick let fly from the edge of the box but the ball pinged against the foot of the upright, before, 3 minutes later, an event occurred which might on another day have caused the floodgates to open. Dan Fitchett, in front of goal, appeared to be pushed as he was about to pull the trigger and most in the stadium were convinced that this was a stonewall penalty. Unfortunately, referee Dan Flynn thought otherwise and waved away the appeals, although he indicated afterwards that he might have made a different decision had he had the benefit of the video he was ahown. The decision almost certainly had a great bearing on the outcome, but as we all know however, even instant VAR can also get things wrong!

The Whites seemed to take this knock-back in their stride, especially when Shaq went on a mazy run and was only prevented from scoring with a defensive block, but it was hard to swallow when Tiverton took the lead on 23 minutes. There seemed little danger when Jordan Bastin cut back onto his left foot and fired a shot directly towards Beauchamp, but the keeper couldn’t hold the ball which fell obligingly at the feet of Alex Fletcher who gratefully accepted his chance.

As if that was not bad enough, Tiverton then plundered a second goal within two minutes, this time Fletcher’s quick reaction saw him in the clear but Beauchamp kept out his finish, although once more the ball, which could have rebounded anywhere instead landed up at the feet of Bastin who doubled the visitors’ lead.

Again there was a good reaction from the Whites who might have been forgiven for letting heads drop at least until the interval, but they were in no mood for this to happen and on 37 minutes got back into the game when Fitchett went along the edge of the Tivvy box before hitting a rising left foot shot into the top corner.

The Whites might easily have been on terms before the break when firstly Shaq cut in before sending firing over and then into time added when the same player was denied by Michael Peck, who hacked the ball away from the goal line.

The way Salisbury were playing indicated that there was a lot more to come and even at 2-1 down there was no real reason to doubt that they would get something from the game, if not all three points. On 53 minutes a Lewis Benson corner saw Fitchett’s header hit the bar, before, only seconds later, Fitch turned provider, laying the ball back to Benson whose attempt brought a good save from Lovett.

The fates seemed to be conspiring against the Whites when yet again the woodwork prevented Fitchett from levelling things up after being put in by Benson, but then things flared up after a coming together between the Salisbury striker and River Allen. Although it was abundantly clear why Allen received a straight red card, the same could not be said about that punishment being meted out to Fitchett, and again, with the benefit of the video after the match, it appeared that the offence should have more correctly earned a yellow card.

In the final stages of the game, the visitors might have made the points safe, but Beauchamp was brought into a rare piece of action when he saved well from Tyler Elliott on 74 minutes. Two minutes later, Salisbury had two hopeful penalty appeals in quick succession, both turned down probably correctly – firstly from a suspected handball, and then, in the same attack when Shaq appeared to take a tumble under a challenge.

There was no letting up in the Whites’ pressure and they got their reward on 82 minutes when a ball from defence went through the right channel where Ollie Knowles held off a chasing defender before slotting home the equaliser. With 5 minutes of normal time remaining Shaq again dribbled across the box but Lovett pulled off a great save from his right foot effort and then the wide man was unlucky to see a drive from the corner of the penalty area fizz just wide of the mark.

Tivvy then produced their last threats of the game. Elliott fired across the face of goal on the 90 minute mark and then, after 7 minutes of added time did the same with another cross shot, but it was the Whites who ended the game with further chances. Lovett did well to keep out another Shaq effort and seconds before the referee blew for full-time Benson’s free kick caused an almighty scramble in the box, and in the melee Nathaniel Oseni somehow managed to lift the ball over the bar from close in, when it would have been easier to score.

This was a moral victory for the Whites as they start a run of four difficult league games, with three away, but they can take heart from their performance against Tiverton in which, on the day, they showed themselves to be the better footballing side in many respects. Unfortunately that did not translate into the thing that matters most, scoring goals, and that must be addressed if they are to mount a serious challenge for the end of season play-offs.