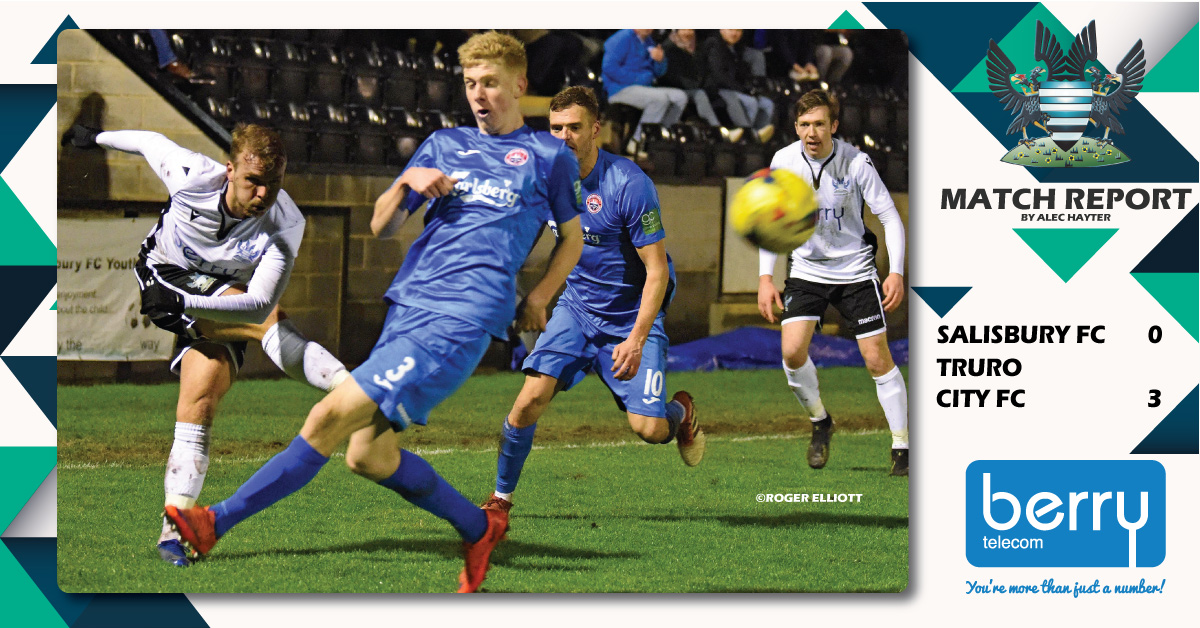 I was left wondering whether the visitors were a brilliant side or whether the Whites’ performance made them look so, but came to conclusion that it was a combination of both, and that led to consideration of why that might be. City, who are in a very strong position and, in my opinion on last night’s evidence likely to gain promotion as champions, probably would not have thought their task as easy as it turned out against a side several places below them in the table but threatening to make upward progress, but it was made so partly because of the circumstances in which Salisbury found themselves.

The following are not excuses, but facts. The late recall of the impressive Dominic Jefferies (who, hopefully, will return, having been needed in an emergency situation at his parent club), was a blow, but in his and other absences, Salisbury were forced to press into action squad members who would ideally liked to have had more time to recover from injury, and probably would not have been called upon against such difficult opposition were alternatives available. Whilst it was good to see Josh Sommerton, Jake Wannell, and Darren Mullings with their boots on once more, it was obvious that Josh, after a long layoff, and Jake, after having turned his ankle recently, were not going to play 90 minutes. Darren, also after a lengthy absence, was forced to play the whole match.

There were some OK performances, including a creditable debut from Joe Willis, but a blunt attack did nothing to put the visitors under any real pressure, and once they had taken the lead shortly after the interval there was never any question of seeing the type of recovery from the home side that we have become used to. Five or six OK performances were never going to be enough against a high-flying Truro side.

The first half was much better than the second as far as the Whites were concerned, but after Toby Holmes had taken too many touches and then lost control of the ball from a good position after only 4 minutes, there was little for home fans to get excited about until another 20 minutes or so had elapsed. In the meantime Truro’s William Swan , in similar fashion to Holmes lost control of the ball in front of goal on 6 minutes and later Alex Lafleur was forced to make a great block when Tyler Harvey was through on goal. On 23 minutes, Marcus Beauchamp did his bit with a good save from Swan, and in the course of the first half on several occasions acted effectively as an extra defender with immaculate timing.

On 27 minutes it seemed as though someone had thrown a switch when Lafleur brought a great save from Truro keeper James Hamon, the Salisbury man having found a way through the defensive wall with his free kick from the edge of the box, and all of a sudden Salisbury were getting forward and had a penalty shout on the half-hour when Shaquille Hippolyte-Patrick appeared to be upended. Opinions as to whether the foul occurred inside or outside the box differ but the referee, in the best position, decided that a free-kick and not a penalty was the just punishment. There appeared to be no indication from the assistant to help him in this decision. Interestingly, the Truro internet commentator next to me was convinced that a penalty should have been awarded, as he was also later convinced of the probable outcome when Bay Downing seemed to be tripped by a defender’s outstretched leg.

Another free kick on the edge of the box, this time from Lewis Benson, was fairly predictable and the wall did its job, and on 39 minutes Salisbury had another good chance when Lafleur got to the byeline and put in a great cross which Owen Howe could only head at the keeper. This only served to spur the visitors into action as on 40 minutes Alex Battle, who had had a short spell with Salisbury, put a shot on the turn over the top after receiving a great through ball from Ryan Dickson, and three minutes later Niall Thompson nearly made the most of the acres of space in which he often found himself to bear down on goal, but to the relief of many his final attempt was a tame effort at Beauchamp. The half ended with Benson feeding the ball inside to Downing but with the resultant attempt being deflected over the top, and for different reasons both sides might well have been happy with it being scoreless at the break.

There was always the feeling however that a Truro side brimming with confidence would only need one chance, and that arrived four minutes into the second half when, after Swan’s try had clattered the post, the ball went wide to Thompson near the byeline. He crossed to the far post where Harvey was given time and space by some sleepy defending to head in the opener.

As if that was not bad enough a second goal followed four minutes later to really seal things. Sadly it occurred straight after a Salisbury attack in which Hamon had pulled off a great save, when in a quick breakaway Thompson again exploited the space available and got in position to deliver the ball across the face of goal where Ryan Law belted it past Beauchamp.

Game set and match, although on 59 minutes Salisbury might have received half a lifeline when Downing got into the box and appeared to be tripped by a defender, causing the Truro commentator to repeat his assessment that a penalty should have been awarded. With 16 minutes remaining, the most disappointing goal conceded on the evening made it 3-0 to the visitors when the Salisbury defence stood aside and Harvey received the ball in enough space and with enough time at his disposal to pick his spot, which he duly did. (The phrase “time and space” used too frequently, sorry!)

When it no longer mattered, Mullings wasted a good opportunity in front of goal seconds after Truro’s third, and Benson’s fierce right foot attempt was deflected to safety by Howe of all people. Even if both chances resulted in goals, it is doubtful whether the outcome would have been changed.

How times can change! After having battered Tiverton Town in all but the final scoreline, a substandard performance at Met police yielded nothing, and the Truro game likewise, to provide a pointless return from two important games. Hopefully with better weather our faithful supporters will turn up for the game against Hendon on Saturday. Salisbury had a fairly easy ride with a 3-0 victory at Hendon earlier in the season, but the visitors will now be a different proposition, having been invigorated and improve their form improve after taking ex-Arsenal’s Ian Allinson on board as manager, with the inevitable new signings that follow to freshen things up.