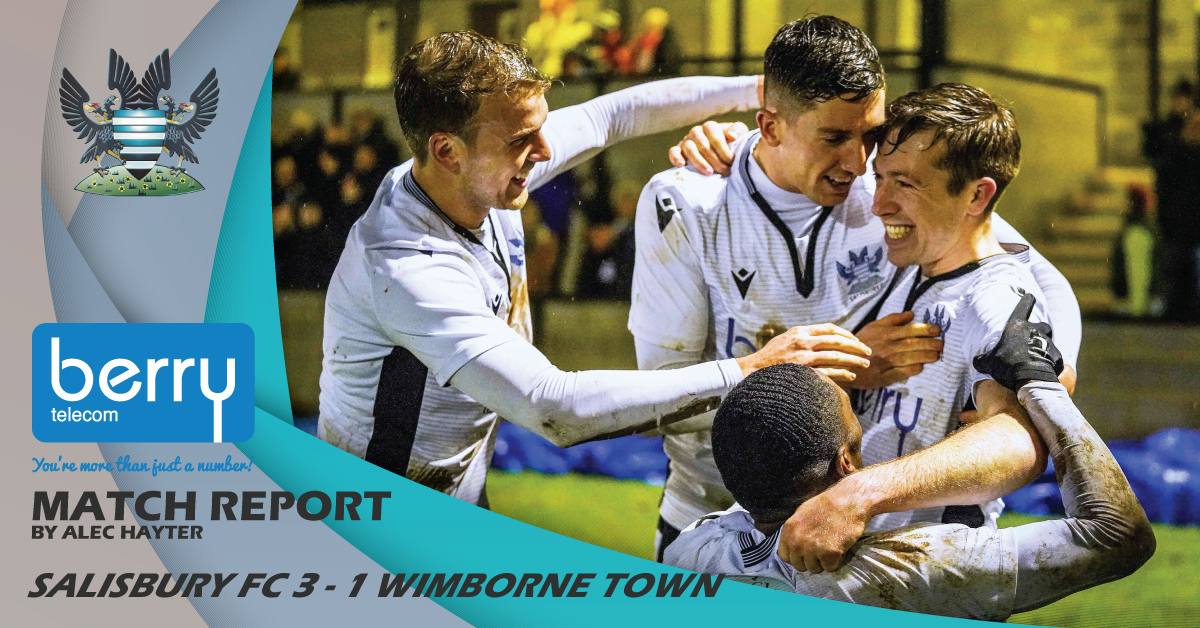 Six points from the last six is the ideal way to see out 2019, but, annoyingly, the latest three produced no immediate movement in the league table. The rewards will however be shown later on when, as inevitably happens, other teams suffer a period of “downtime” in terms of form.

What seems to have become the usual annual Bank Holiday encounter with Wimborne had all the usual facets – a local derby, a hard-fought battle, and three points for the Whites, but a flying start from the hosts went unrewarded when, had it been otherwise, a lot of the interest would probably have been lost in the game at an early stage.

On three minutes Nathanial Oseni, in a role further forward than previously, laid the ball back to Bay Downing whose shot went wide of the target, and two minutes later only Toby Holmes will know how he miscued in front of goal. Shaquille Hippolyte-Patrick then brought a good save from keeper Cameron Plain before Wimborne manufactured a couple of chances, which should have sent a warning message.

On 11 minutes Sam Bayston was allowed to go all across the area before sending his finish well wide of the target, and 6 minutes later Luke Burbidge got round the back of the defence before hitting a rising cross shot which Liam Armstrong efficiently touched over the top at full stretch. It took until the 25th minute for the Whites to threaten again after their bright opening and a good chance went to waste after Holmes flicked a header past the defence Owen Howe to bear down on goal, only to see Plain do his job with an excellent block.

Up until that point, most of the effective pressure had been from the home side but, as it can often happen, it was the visitors who took the lead, and what a finish Bayston produced to create one of the more memorable moments of the 90 minutes! Having picked up the ball just outside the box, he cut inside and unleashed a right foot shot which went in the top corner giving Armstrong no chance whatsoever. Buoyed by that goal, the Magpies might have doubled their advantage on 36 minutes when Bayston delivered the ball into the box and Tony-James Lee failed to capitalise in front of an open goal.

Four minutes before the break, Owen Howe had a sharp chance at the near post when a cross came in from Lewis Benson, but the striker played his part fully six minutes into the second period with an assist from the byeline which found Holmes centrally placed. A measured square pass then found Shaq to drive a low shot past Plain. Four minutes later the wide man might have had a second but he was denied by the upright. Little was now being seen of the Wimborne attack, and Oseni’s lobbed pass Holmes with a sniff. It was obviously not going to be Toby’s day against his old club, and he put an awkward chance over the top.

On 58 minutes most of the home crowd, me included, wondered how Salisbury had been denied a penalty when Howe seemed to be floored in the box and three minutes later another appeal was waved away, this time when, after a combination between Shaq and Downing, keeper Plain parried the ball out, but Holmes appeared to be impeded in the melee.

Wimborne weren’t finished and the impressive Bayston was only prevented from pulling a goal back by a superb last-ditch Downing tackle, and it was the same Salisbury player who provided much relief in the 78th minute when he converted a penalty given for a foul on Shaq – third time lucky with appeals!

Three minutes later Jake Wannell brought a good save from Plain with a free-kick from the edge of the box, but on 84 minutes the score line was made to look more representative when Lewis Benson fired in a free-kick special. If Bayston’s opening goal had created a memory then this free-kick should remain as such for a long time, although I’d accept another one please! The same top corner which had greeted the ball from Bayston’s finish welcomed Benson’s 25 yard effort, with both finishes being remarkably similar in terms of the amount of bend and curl put on the ball.

The last goalmouth action, however, went to the Magpies but following his early efforts will not have pleased Bayston as he wasted a good opportunity after being put in by Lee.

I started this report saying that six from six was a good return, but needless to say that in order to keep in touch nine from nine would be more than ideal. A game at Yate Town is never an easy one, but that is what follows on New Year’s Day, and in spite of the well- documented injury list, there is some good news in that the Whites will see the return of Dan Fitchett after suspension, to add to the numbers available.

Think of the players who have to curtail their celebrations in order to perform over the festive season – I hope that you will reward them by getting up to Yate in your numbers and giving them your usual vocal support, with a nosy repeat presence on 4th January for the very important clash with high-flying Chesham United.