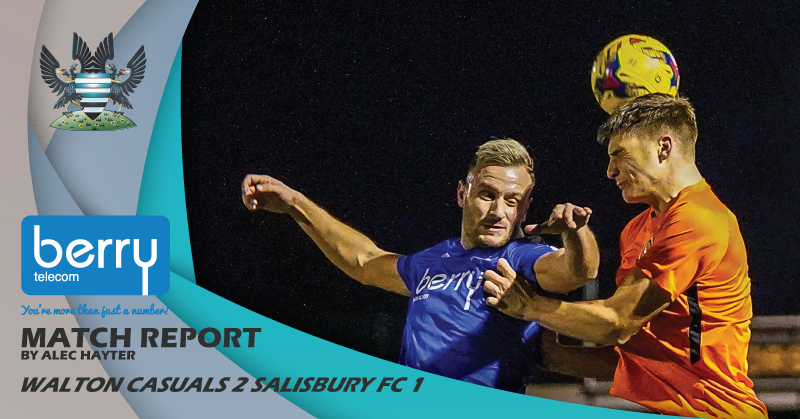 There’s a saying:”Possession is nine points of the law”, but in football, possession itself guarantees little, and for all the toil on the artificial surface at Walton (and that was not to blame for the result), the Whites returned without a point after running the game for long periods against a team who, in truth, they should have dispatched without too much difficulty. One of the reasons they didn’t do so was perhaps illustrated on Match of the Day in the post-match punditry about Newcastle/Man City where reference was made to “safe passes” and the contrast between the two sides, where the supposedly inferior team were the more effective. Combine that with Whites’ defensive lapses, which they had got away with against Hayes, and there you have some of the reasons behind this defeat, although not the only ones. The home side can be very grateful to a loanee keeper from Reading, making his first appearance and excelling at the Xcel Sports Hub. He, single-handedly (and occasionally with both hands), prevented a scoreline of 3-1 to Salisbury at half-time.

A great start start saw Shaquille Hippolyte-Patrick fire a second minute vicious cross-shot which tested Myles Roberts to the full, the keeper making a great save, but before the game had really got going the home side struck. It will be a disappointment to Steve Claridge that a lapse of concentration allowed an early goal from a set piece, David Fitzpatrick delivering a corner to the far post where, somehow, Rene Howe, not the tallest of strikers, headed the opener.

An Alex Lafleur free kick from the edge of the box went narrowly over the top on 8 minutes, but 7 minutes later the same could not be said about Ollie Knowles’ 25 yarder. On 20 minutes Lafleur’s cross from the left was met on the volley by Toby Holmes, but the goal-bound effort was brilliantly kept out by Roberts to prevent what could have proved a telling equaliser.

On 25 minutes Lafleur again provided a cross which Warren Bentley could only head at the keeper, and it was not until a couple of moments later that Walton threatened again, although Jay Gasson’s header well over the top hardly merited “threat”. An inability to keep the ball down seemed to be catching as Shaq launched a 25 yard effort, but he made amends on 39 minutes when he left defenders in his wake in a surging run from the halfway line to the bye-line before squaring the ball to Warren Bentley in front of goal. No, the ball didn’t go over the bar, but instead dribbled just wide of the far post, and thus at the break Walton maintained a slender lead after surviving a great Whites’ chance.

Shortly after the interval, Casuals had their third chance when a clever Howe back heel found Rohdell Gordon, but Gerard Benfield was equal to his attempt. On 50 minutes at the other end yet another great save from the home keeper denied Lewis Benson’s fierce free kick round the wall from the edge of the box before perhaps the best and easiest chance of the half came and went. Bay Downing sent in a sizzling cross at head height, but Darren Mullings could not get enough of his head on the ball, which ended up going harmlessly out of play.

Owen Howe then entered the action on 63 minutes for his first exposure following his return and was unlucky to have a right foot effort deflected to safety six minutes later, and apart from the need for Nathaniel Oseni to make a last-ditch tackle on the Casuals’ Howe with 5 minutes remaining, it seemed only a matter of time before the Whites got back on terms, or better.

They duly did so when Bentley scored in the 87th minute, but their joy was short-lived as, two minutes later, concentration at the back failed as Salisbury were caught out pushing for the winner. The wily Howe was again involved, squaring the ball in a breakaway to substitute Wayne Brown in front of goal who scored with a low shot into the corner.

On Tuesday evening, Melksham Town visit the Ray Mac in the Wiltshire Premier Shield, and it is important that the players on show take the opportunity to put right some of the wrongs and show what they can do. It is even more important that on the following Saturday they send Blackfield and Langley back down to Fawley without reward if they are to reverse a downward path in the league, where they are now eighth, and 5 points behind Taunton who occupy the last play-off place. Saturday’s results make the quest temporarily more difficult, but of course it is still relatively early days and the Whites could do with a couple of morale boosting victories, and maybe even further progress in the FA trophy at Eastbourne a fortnight today to get back on track.