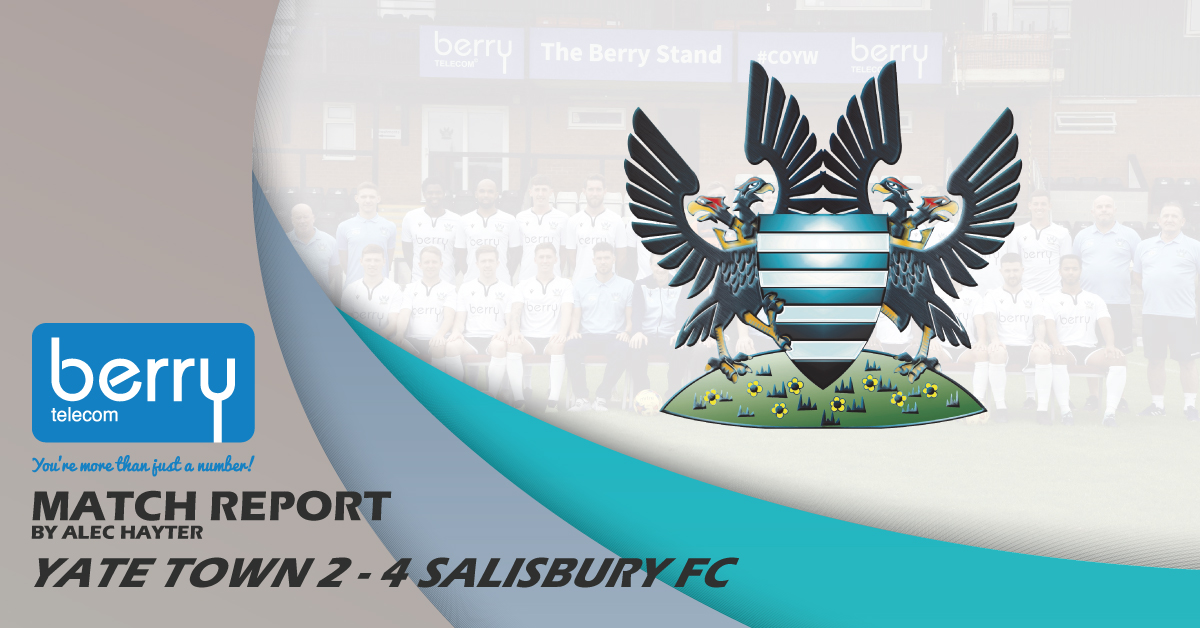 I’ve always regarded 2020 cricket as being a bit “gung ho” compared to other forms of the game, and in the first sample of 2020 football seen at Yate today we saw an end-to- end game which may have been too “gung ho” for managers, but provided some good entertainment for the larger than usual crowd at Lodge Road, normally averaging around 199 (thank you travelling Salisbury supporters!). In the end it was the Whites who outscored their opponents in what looked on paper to be possibly one of the easier games away from home, but games at this venue are never usually that, and with a regular influx of some talented loan players from the nearby Bristol clubs it’s always difficult to assess exactly what will be faced, so it is very creditable that the Whites added another three points to their season’s total.

As early as the 5th minute Yate threatened in what was always a high tempo game, with James Taylor feeding the experienced Nick Peare who sent in a left foot effort which was kept out by Liam Armstrong.

Four minutes later it was Salisbury’s turn as Jake Wannell’s cross from the left gave Warren Bentley a headed opportunity which home keeper Adam Forster did well to touch over the top. Straight afterwards Shaquille Hippolyte-Patrick saw his finish from the edge of the box fly just wide of the target, but in retaliation he Bluebells hit straight back with Luke Spokes’ effort being touched onto the bar by the Salisbury keeper.

The same fate befell Dan Fitchett’s header from a Lewis Benson freekick on 15 minutes with the home keeper doing a good imitation of Armstrong’s previous save and, needless to say, straight away at the other end, the home side tested Armstrong once more when Malshanskyj cut inside and tried a left footer.

On 22 minutes Yate produced their best chance so far when a through ball from Peare found the same quick striker whose blast was kept out by the underside of the bar, and a couple of minutes later Spokes squared the ball to the same player who was again denied by Armstrong. To finish off a powerful period for the home side Peare saw his attempt from the edge of the box saved, and what followed was at the time somewhat against the run of play when Shaq was brought down in the box and referee Matt Rushton pointed to the spot. Salisbury seem to have found themselves a consistent penalty taker, and Bay Downing stepped up to notch his third spot kick success in as many games, wrong footing Forster.

The slender lead at half-time might have been a worry on balance of play, but nerves were settled to some extent eight minutes in to the second period when, following a Benson corner, Dan Fitchett marked his return from suspension with a goal from no distance at all in a goalmouth scrum, to afford a little breathing space.

That was brief however, as again, in context with the general flow of the game, Yate responded immediately with Spokes bearing down on the byeline before hitting a firm shot across Armstrong and into the corner to tighten things up with 55 minutes on the clock. Back at the other end, Fitchett had an opportunity but his cross-shot went just past the far post before the two-goal advantage was restored shortly before the hour. Not for the first time had Shaq caused chaos by cutting in along the edge of the box and this time he saw his shot deflected up and over the stranded keeper to make it 3-1.

With 13 minutes remaining the Salisbury scorer turned provider, feeding sub Toby Holmes whose effort was saved by Forster, but, surprise surprise, the home side got themselves back in contention once more when the impressive Joseph Low got to the Salisbury byeline and was approaching the near post when he tumbled under a challenge. I can’t say that I noticed any great appeals for a penalty by home players, but Mr Rushton, who was of course much nearer than I, again pointed to the spot amongst strong protests from the visitors. A penalty it was however and Spokes had what was almost the last word for the home side when he slotted home the kick to make it 2-3 on 83 minutes.

A tense last few minutes was inevitable as Yate had the initiative, and it took a goal-line clearance from Benson to maintain the one goal advantage. However, the one goal became two goals on 87 minutes as good work by substitutes Owen Howe and Holmes gave the latter a chance to square the ball across the box where the third substitute, Danny Young, gleefully belted in Salisbury’s fourth. A vindication of wise substitutions if ever there was one!

The actual last word on proceedings came in time added when Yate’s Sam Bell narrowly missed the target with a cross shot.

The three points were very welcome, but were hard- earned against a side in the lower reaches of the table, but earned they were to ring up the fourth game unbeaten in the league. It will be, again on paper, much more difficult to keep that run going on Saturday when form team Chesham United, second in the table, visit the Ray Mac. Only the best of performances, supported by the noisiest of crowds can help secure the points, and after the fairly disappointing attendance on Boxing Day, please come along with your friends and help the Whites achieve what we want them to and take the maximum reward from what is a very important game, and one which gives the team the chance to put right the defeat at Chesham on the opening day of the season.