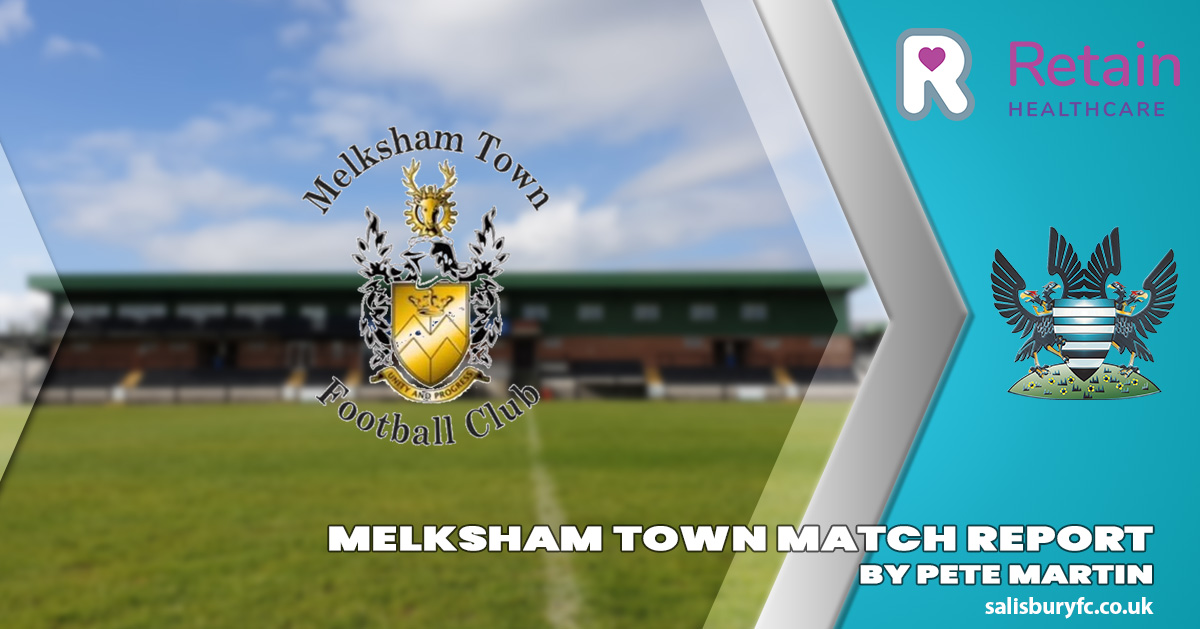 Salisbury made it into the last 4 of the Wiltshire Premier Shield with a hard-fought win at home to Melksham Town. A strong Whites team saw welcome returns from suspension for Sam Roberts and Darren Mullins as well as a debut for Woody Angell, signed on dual-registration terms from National League side, Aldershot Town.

On a cold and foggy night at the Ray Mac, the first chance of note came after 5 minutes and saw Melksham’s Luke Ballinger pull his shot wide following a link-up with Ralph Graham. It took Salisbury until 12 minutes to pose any sort of threat but Devon Arnold was unable to take advantage of a dangerous looking ball from Antonio Diaz. The next opportunity went the way of the visitors but Albie Hopkins could only shoot wide after cutting in from the left and 3 minutes later Salisbury had the best chance of the game up to that point when Josh Wakefield’s long ball found Arnold in space, although his shot was well saved by keeper Matthew Hall. The resulting corner was cleared by Melksham and after a rare error from Josh Sommerton, Ballinger could again only shoot wide. The first goal of the game arrived after 35 minutes and it followed a fine move from the home side. Arnold did well to pick up possession in the right-back area and found Diaz moving forward. He in turn was able to feed a ball through to Sam Ashton who finished calmly when 1 on 1 with Hall. That proved to be the final goalmouth action of the half with Salisbury just about shading the play.

The 2nd half nearly got off to a perfect start for the home side but a good save from Hall denied Angell a scoring debut after he was set up on the edge of the box by Arnold. Salisbury were again the next to threaten when Diaz drove forward from the left-back area but could only put his shot narrowly wide when aiming for the far corner. The Whites were made to pay for not turning possession into goals when Melksham drew level just after the hour mark. Jake Mawford was given time and space to cut across the edge of the box and his perfectly placed shot curled in at the far post beyond the outstretched arm of Patrick O’Flaherty in the home goal. Salisbury rallied and Angell again saw Hall save his effort from the edge of the box and both Arnold and Charlie Kennedy were unable to trouble the keeper when given the chance. Melksham gave the hosts a reminder of their capabilities with 12 minutes left when Jay Malshanskyj found himself in behind but his attempt to lift the ball over O’Flaherty saw the ball land on the roof of the net. There was a touch of fortune about the winning goal 5 minutes later; Josh Wakefield’s attempted curler took a big deflection and left Hall completely wrong-footed as it nestled in the bottom corner. With the fog worsening Melksham ended the game strongly but were unable to find another equaliser and the whistle went to ensure they went home empty-handed despite their best efforts.

Salisbury will look to build on the result and end a run of 6 league games without a win this Saturday when they host Weston Super Mare in a 3 pm kick-off.