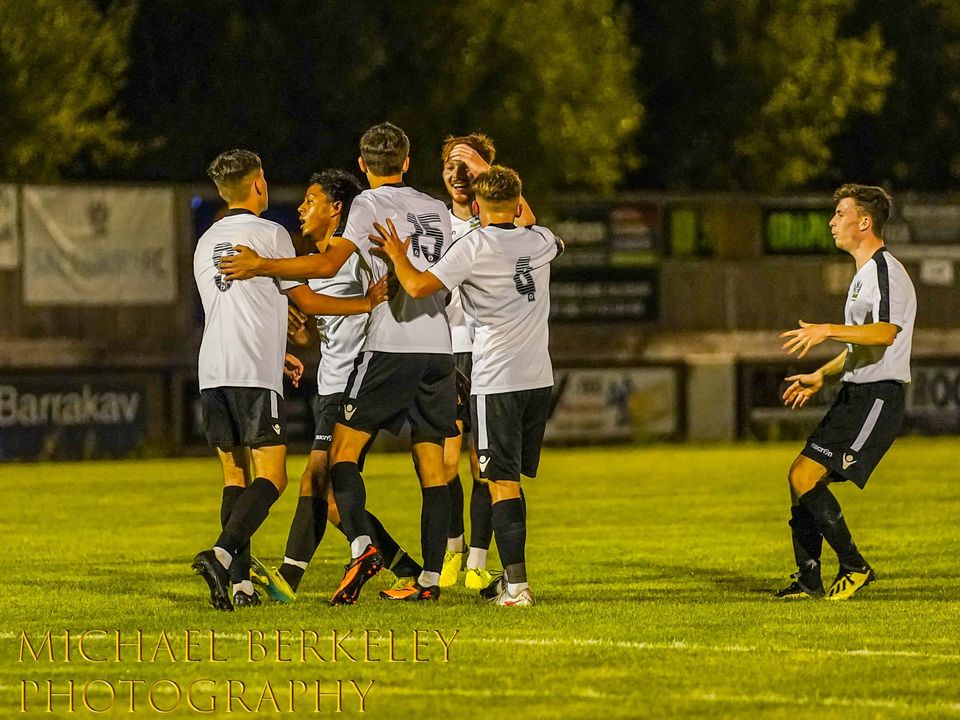 The Whites travelled to the Surefix Home Improvement Stadium for their second match of the season expecting a very different surface than the Ray Mac, and they were not disappointed.

A serious slope from left to right and a pitch not conducive to slick passing football, but to the credit of both teams the surface did not stop them trying to play the game in the right way.

The first 20 minutes were a scrappy affair with very little quality from either side. A good through ball to Kelvin Lichowe from skipper Hawke, created a chance but the winger was unable to make anything of it. A few minutes later the hosts created the first chance of any description when their No 9 broke through in the 23rd minute and forced a one on one with Duff, but his shot didn’t trouble the keeper. Pressure though was growing from Petersfield and another chance was missed in the 25th minute with another shot which was skied over the bar.

The Whites were probably struggling a bit more than the hosts to adapt to the conditions, but eventually they did carve out their first threat on the home goal when a neat passing move got the away side up the field, cumulating in Waterson getting a shot away, but to his dismay it went a fraction over the bar.

A tactical change saw Sam Butt move to the left wing, Thomas to midfield and Nathaniel to left back. The Whites now looked better balanced, but nevertheless it was Town that created the next chance when a strong drive by their number 9 saw another shot go wide.

A good drive by Kelvin Lichowe saw the winger latch on to a through ball by Ruben Smith which was saved by the keeper. Moments later another good ball into the box, this time from Layton Tulk saw a header from Sam Butt go straight at the keeper. Petersfield instantly replied with a ball over the top seeing another scoring opportunity but yet again being put wide by the striker. The game was now end to end as a the visitors went up the other end in a promising move, but it came to nothing.

At 40 min a corner for Petersfield, was initially cleared, but not far enough resulting in the ball coming back in to the 6-yard box and headed into the net. 1-0 Petersfield.

To their credit the young whites instantly re-grouped and a good effort from Smith forcing the home keeper to make a good save. On the stroke of half time a ball from left back David down the line to Butt which the makeshift winger manages to pass downhill into the path of Lichowe, unfortunately like many shots on this pitch that went high over the bar. There was enough time left in the 1st half for Salisbury to force another corner, again though it came to nothing.

The management as half time asked for a strong start in the 2nd half, the team delivered what they had been asked for. Immediately a good ball from Smith the no 10, should have found his strike partner Waterson, but the keeper was sharp of his line and gathered the ball in.

A smart move down the right forced yet another corner, and another missed chance. Moments later another good delivery by Tulk, sees the ball scrambled away by the Petersfield defence, and another shot which went close, but not close enough. Straight from their goal kick Sam Butt wins the header which drops in the path of Waterson, his shot was decent and forced a decent save out the hosts stopper. A further save by the keeper followed was pounced on by Nathaniel David on his Salisbury debut, this effort though unfortunately went wide.

The host made some changes to their ranks, undoubtedly, to try and stem the pressure being applied by Salisbury, however it didn’t have any immediate effect. A muddle at the back by the Petersfield defence sees another ball scrambled away in some last ditch defending. Salisbury have certainly come out much the stronger side with all the above pressure being fitted in to the first 18 minutes of the 2nd half! But importantly the hosts still had the lead.

However, that changed in the 63rd minute when a free kick down Salisbury’s right-hand side 25 yards from bye line was whipped in invitingly by Tulk right into the corridor of uncertainty. With what resembled a sort of karate kick volley, Sam Butt struck the equaliser.  Score 1-1.

The visitors now made their own tactical change with Thomas and Waterson off, the 16 year old striker replaced by the team veteran at 20, Ed Timperley, Isaac Thomas was replaced by another 16 year old in Rob Jones.

At this stage the game probably looked like it could go either way, a good through ball from skipper Alfie Hawke to Lichowe had the keeper and fullback both combing to smother the chance.  Some good play by the visitors sees Petersfield creating a few opportunities, there was pressure from Petersfield, but the Whites definitely held their own and kept it to just shots from distance mostly.

With the clock ticking down, it seemed like a point here away from home would be a good result. Another tactical change saw the again impressive Tulk depart from his right back birth to be replaced by a defender in Tom Feest. Perhaps in anticipation of a bombardment from the hosts that were desperate to get the 3 points.

The home side made their final change with 12 to go. With both sides now with all the dice shown it was time to see who wants the win more than the other.

With all the substitutions it was Petersfield that settled the quickest and forced a corner although poor delivery resulting in a goal kick. A throw in on half line for Petersfield saw Butt win the ball back, quickly followed by foul on the Salisbury 8. The whites soon got back in the groove and some good movement through the midfield, saw a shot by Timperley hastily cleared for a corner. This time it was Salisbury’s turn to deliver a poor corner that immediately sees a change of possession and the whites chasing back to their own goal, a some would say, needed foul saw Hawke pick up a yellow for the team. A free kick for Petersfield some 40 yards out which thankfully nothing comes and finds the grateful hands of Duff.  Up the other end we go another good through ball but no positive outcome for Salisbury. At is point weight of pass training is top of the agenda next training session as on 5-6 occasions today the whites front men were frustrated by balls played just too hard.

A tense 5 minutes remained but it turned out to be a 5 minutes that at least those present will probably be reminded of again and again, and again this season.

There are now tired legs all over the field for both sides. Salisbury breathe again.  In what was to be the hosts final chance yet another desperate more than anything else shot from distance by the hosts didn’t get anywhere near the goal, meaning that Duff in the whites goal didn’t actually have to make a save the whole game.

The Whites where controlling the game well at this stage. With a couple minute to go I was already thinking about the debrief after the game, ‘a point here on this pitch away from home is a decent result’ was on the cards, but one barely 18 year old hadn’t read that script. Step forward Sam Butt.

In the 88th minute the number 8 picked up the ball on the halfway line, right on the left hand sideline. He beat the first man by cutting inside and swiftly swept past the next attempt to stop him with sheer speed and ease. The next attempt to stop him came from two town players at the same time but all they could do is watch as Butt somehow drove through their desperate attempt to halt his progress, and to his credit kept his feet and drove on. Some 35 yards out now and before the next defender had a chance to stop him, Sam took full advantage of a bobble on the pitch that saw the ball bounce up off the ground,  he then caught the ball sweeter than he will probably ever strike a football again, with the result that it absolutely rocketed past the helpless keeper in to the top right hand corner of the Petersfield goal. Had there been 2 keepers in that goal they still would not have stopped it. Watch the video and you will realise I am not dressing this up too much, in fact probably I am under praising the young man’s strike.

With a little over a minute left the whites tried to defend in the opposition’s half, and showed some good game management when they forced a corner that used up some valuable time but when taken came to nothing. There was one last chance for Town to launch the ball into the Salisbury box, even the keeper came charging up. But left back Nathaniel David was first to the ball and put the ball down the line and out for a throw.

That was to be the last action of an entertaining match between tow young sides. Petersfield themselves are doing things the right way in my book with their entire squad under 23 years of age. The Whites are still a fair bit younger than that with an age range of 16 to 20 years old.

Mark Winter (The ‘I’ in the above) adds, although the game lacked much class, mostly down to the playing surface I think, which did not help either side equally. It will, however, be remembered for a moment of quality of the highest order from that man Sam Butt. It is not the first match report I have written where a Sam Butt volley was the difference. Sam has been with my team since 11 years old so he has been practicing that for a while. Lets not take away anything from the team effort though, to a man they battled well and got what they wanted, another win. There will be plenty of times when it does not go our way this season, so you have to enjoy the win’s when you get them.

Next up for the dev is a return to the Ray Mac on Tuesday night (15th) for a 7:45 K.O v local side Laverstock and Ford FC reserves. We would welcome any support we can get as the boys have another very different challenge to face.