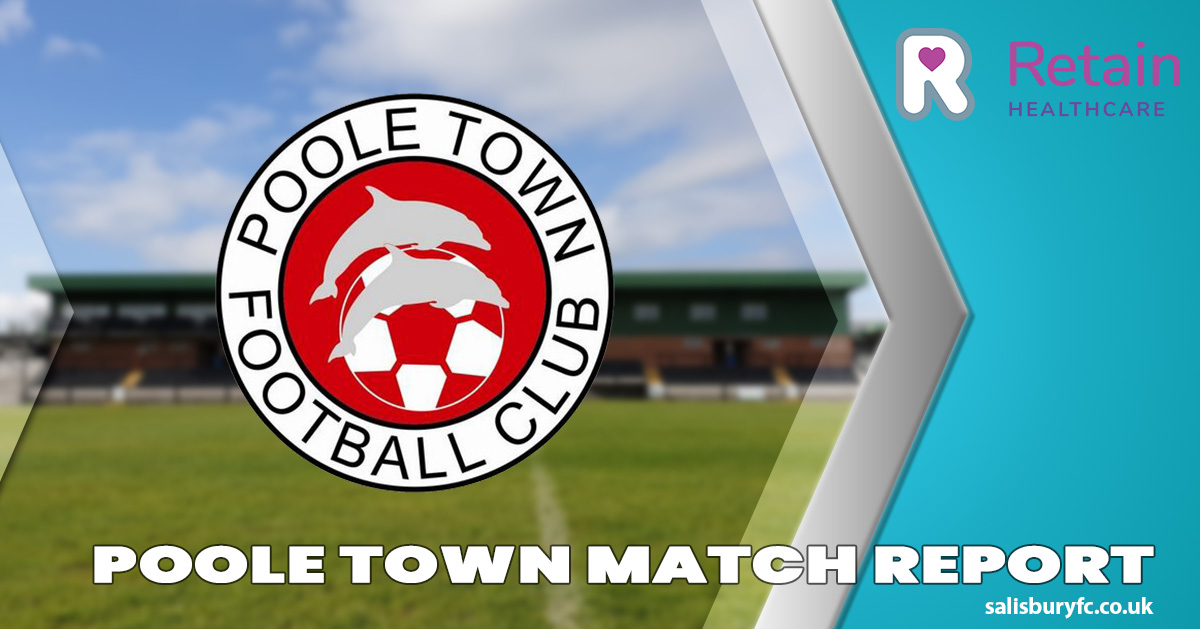 A severely depleted Salisbury, only able to name 1 substitute, came away from a tricky away game at Poole Town with a well-earned draw following a battling performance. The Whites team saw 3 changes from last week’s draw with Yate; Ollie Knowles, Charlie Kennedy and Harry Baker starting in place of the injured Jack Ball and Marvin Brooks and the suspended Darren Mullins.

The home side were the first to threaten inside 2 minutes but Luke Burbidge shot wide and the same result was achieved 10 minutes later following a ball in from the right. Salisbury’s first real attempt came after 18 minutes when a fine ball from Knowles found Baker on the left side of the area but he could only put his shot wide. The game was very much a midfield battle and short on chances but after 36 minutes good work from Salisbury striker Sam Ashton saw him set up Devon Arnold only for him to put his effort narrowly wide. 2 minutes later saw Poole have the ball in the net from a corner but it was ruled out for a foul on keeper Marcus Beauchamp and then following probably the best move of the 1st half Whites midfielder Josh Wakefield could only put his shot wide. The end of the half saw Poole have a couple of shots towards goal but nothing that could seriously trouble Beauchamp to leave the game level heading into half time.

It took Salisbury just 5 mins of the Second Half to open the scoring; good work involving Elechi and Arnold saw Ashton turn sharply in the box and finish well beyond home keeper Mark Childs. The lead lasted barely 2 minutes however before Declan Rose drew the home side level following a ball down the right-hand side. As per much of the First Half the game was turning into a midfield battle with there being an increasing number of niggling fouls resulting in free kicks. It was from one of these that Salisbury took the lead again; Charlie Davis attempt at goal took a wicked deflection and left Childs no chance. That proved to be the last real chance at goal for the Whites and despite some dogged defending the home team were able to secure a draw with 10 minutes remaining. 2 good saves in a row from Beauchamp led to a Poole corner and Burbidge fired home from close range to earn his side a point.

Having twice taken the lead it may be seen as 2 points dropped for Salisbury but given the circumstances and number of injuries, plenty of heart can be taken from the performance. The Whites are next scheduled to be in action on Tuesday night away to Hayes and Yeading, although a number of Covid cases saw their game with Harrow called off so please check for any updates before travelling if you are thinking of doing so.