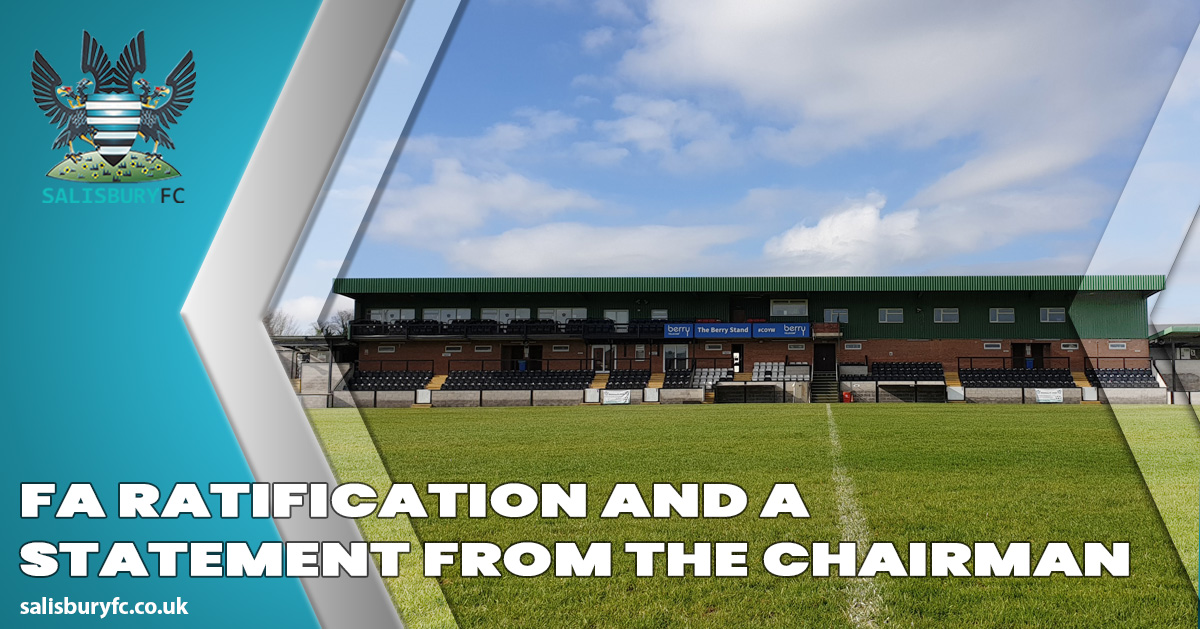 The FA has finally ratified the decision to curtail the 2020/21 Pitching In Southern League Premier South season. With this news, the Salisbury FC Chairman, Ian Hammond has issued the following statement covering the financial situation at the club and news regarding the season tickets from last season.

We now know for certain what has been obvious for many months and that is the formal termination of the 2020/21 season by the FA and a similar premature ending in which the 2019/20 season also endured.

As has been the case for many clubs at our level in the non-league pyramid, there have been financial pressures on us over the past months with no gate monies, bar takings or tea hut sales whilst at the same time expenses have had to be met, such as rent, utilities, insurance and pitch maintenance. I am pleased to be able to say however that by taking advantage of the various grants and arrangements that have been available from the government, local authority and FA, we have been able to meet all our liabilities and can continue to do so through to the start of next season.

We must however now focus on Season 2021/22 and part of that focus is to address the issue of the Season Tickets purchased for Season 2020/21. We are very conscious that only 4 home league games were played representing 20% of the expected home games. In order to be as fair as possible therefore we will be offering an up to 80% discount to those season ticket holders renewing their season tickets for next season. There will be no increase on the basic season ticket prices. Although as I have said we have weathered the financial problems resulting from the lockdowns, this significant reduction of our usual pre-season takings from season tickets will hit our finances. So to try and limit the impact, supporters will be able to advise what discount they wish to apply up to the maximum of 80%. Any portion of the 80% discount not taken will be accepted as a donation to the club with a big thank you from the Board. Season Tickets will go on sale from July 1st 2021 assuming there is no change to the League’s statement that next season will start in mid-August.

If any current season ticket holders do not wish to renew their season ticket they can apply for an 80% refund on the cost of their 2020/21 season ticket. Refund requests should be sent to the club by post or emailed to admin@salisburyfc.co.uk.

It is hoped that the above will be seen as the fairest way of dealing with this issue for supporters whilst also recognising the difficult financial situation the club faces currently, having had no income from gates etc. since October.

Clearly, all plans for next season will have to take account of any ongoing COVID restrictions that may be in place at the start of the season or be put in place at some point in the future. However, I know Steve is optimistic about our potential for success, following on from the great start we had last year, so on behalf of the Board, keep safe, enjoy the summer months and we look forward to welcoming you back to watch the Whites next season.

Keep an eye on the website for the Ask The Gaffer video that is due to be produced very soon with news of how the squad is already developing for next season and all of your other queries that I will put to Steve.

We’re all working hard at the club in preparation for next season. Despite the way the past 2 seasons have finished due to Corona Virus, our enthusiasm remains as strong as ever.

Keep safe and see you at the Ray Mac soon 🤞. COME ON YOU WHITES!