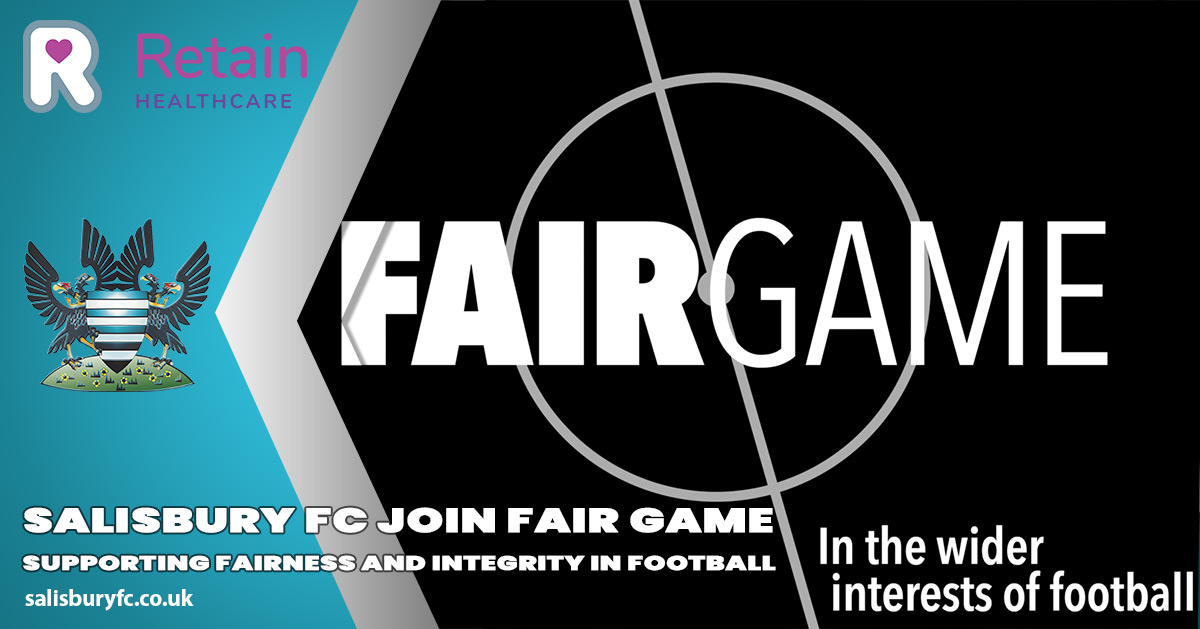 Supporting fairness and integrity in football

Salisbury Football Club today signed up to a new coalition of value-driven football clubs working together to improve governance of football in England and Wales, called Fair Game.

Fair Game is working with a team of over 40 world-renowned experts to find long-term solutions to issues around the game, including protecting the heritage of clubs, a fairer distribution of TV revenues, opposing the European Super League, and tackling discrimination. Last week Fair Game outlined its final proposals in the 48-page document Putting Pride Back In The Shirt.

Central to the proposals is a Sustainability Index which looks at reallocating the parachute payments to clubs throughout the football pyramid that can prove they are run well, respect equality standards and properly engage with their fans and their community.

Fair Game also believes fans should be given the final say on any proposed change to a club’s ‘crown jewels’, which includes the club’s name, nickname, colours, badge and the geographical location of where the club plays.

The organisation also has the backing of several leading politicians, including the Shadow minister for sport Alison McGovern, the mayor of Greater Manchester Andy Burnham, the Conservative MP Damian Green, a leading member of the influential DCMS committee, and the former Liberal Democrat leader Tim Farron.

The timing coincides with the Government’s Football Governance Review being led by the Conservative MP Tracey Crouch, which is expected to publish its final report in the next couple of weeks.

“Salisbury FC is a phoenix club born from the ashes of Salisbury City Football Club.  The history of football in Salisbury is more than enough to demand that change is needed to protect the future of clubs from financial mismanagement and lack of due diligence.

Salisbury FC is proud to be a part of our local community and looks to play an active part in community life in many aspects, not just football.  For it to have a sustainable future particularly for our fantastic supporters we need fairness in all aspects of the game.

We believe Fair Game can help deliver that.”

“Protecting the heritage and the future of our game is hugely important. The city of Salisbury knows only too well what it’s like to feel the heartbreak of losing their local club.

“Salisbury FC is a key part of the community and hundreds of people are passionate about their club. From the volunteers who attend most days to help maintain the stadium and run the club, to the supporters that stream through the turnstiles every game.

“To have an independent group looking to breathe new life into the structure of the English game and to ensure a fair and sustainable future for all is a refreshing and critical move that the Club and I support.”

Niall Couper, director of Fair Game, said: “I am delighted that Salisbury have joined.

“Fair Game is calling for fairness, sustainability and success. At Fair Game, we want long-term realistic solutions and we believe we can deliver them.

“We want a sport where every fan can put their shirt on in the morning proud in what it stands for, safe in the knowledge that the traditions and heritage of their club will always be there.”

To find out more about Fair Game visit www.fairgameuk.org.