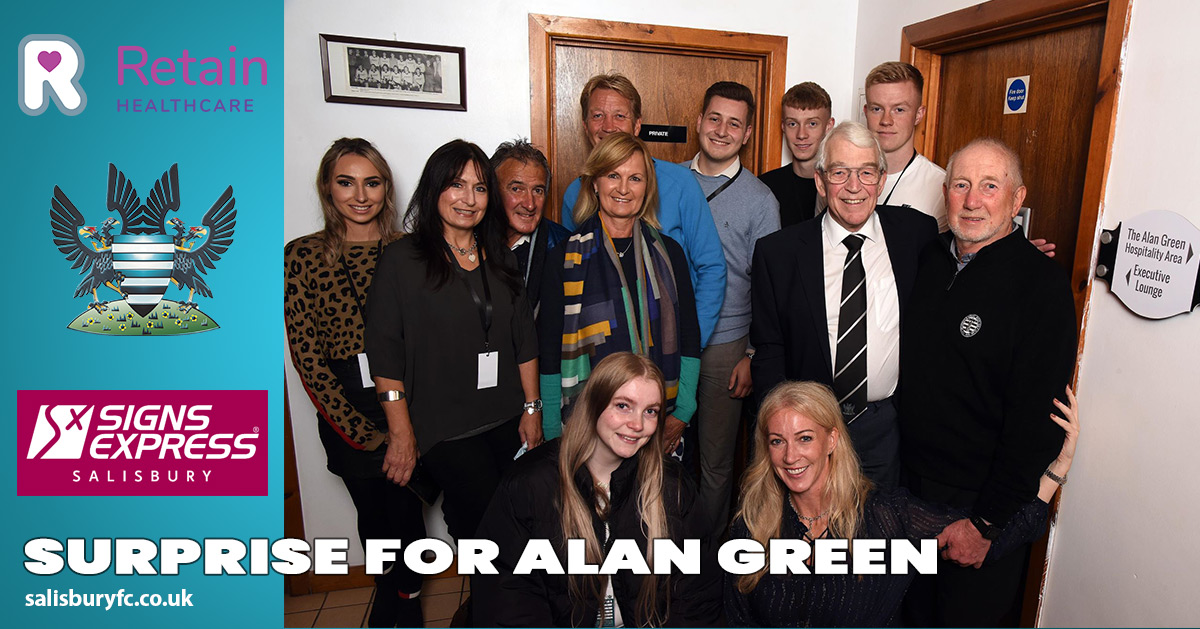 Approximately six months ago I started talking to Alan Green’s daughter, Sam, about honouring Alan and all he has done for the club over the years. Although he has been a player, sponsor, supporter and Commercial Manager for Salisbury, he has, for many years, become well known for looking after our hospitality guests. Something he has carried on doing as a volunteer since retiring from the role of Commercial Manager earlier this year.

So, the plan was put in place that we’d rename the Hospitality Area of the stadium to honour the man that has put so much into it. The signage was created and gifted to us by Signs Express, Salisbury. They have worked with both Alan and me for a few years now so it was a great gesture from them, Thanks to Rod and the team.

That was the easy bit done. To get Alan and his family here at a time that suited everyone and without Alan knowing was the tricky part. I spoke to Alan towards the end of last week and he said he would be at the match on Tuesday evening. Sam and I planned that they would sneak in and be hidden and then we would surprise Alan. At about 7 pm, as planned, a group of family and friends turned up. Only one problem, WHERE IS ALAN GREEN?!

After about half an hour of having the group hidden away in one of the boxes, I decided to risk it and call him.

Me: Alan, are you still coming into the Ray Mac tonight? We’re doing a presentation to the Chairman and we want you in the photos.

Alan: I’m in a pub in town and I’m trying to get a taxi but it’s raining and I don’t want to get wet.

I made it clear he had to get here and crossed my fingers. He finally arrived and joined us upstairs for what he thought was something for the Chairman, Ian Hammond. His family and friends then walked out as I finally released them from their hiding spot. Total confusion crept across Alan’s face. Ian Hammond gave an excellent speech about Alan’s history with City and Salisbury FC and all he had done for the club. As the plaque was unveiled and it became clear to Alan what was happening it all got a tad emotional. We’re pleased to announce that the Alan Green Hospitality Area is the new name for that area of the building.

“I was and am shocked and emotional but overall honoured to receive such a great tribute from the Football Club that gave me the opportunity to rebuild my footballing life following a heart attack in 1972. It has certainly been a fantastic ride both on the field and off through playing, sponsoring and working with everyone involved. I have truly enjoyed every moment with my beloved Salisbury Football Club and am forever grateful for the support that I have enjoyed from day one. I now look forward to many more years looking after my friends, old and new and will walk as tall as I can with pride within our hospitality area. Thank you to everyone involved. Al.“

Thank you Alan Green from all of us at Salisbury FC.

On a personal note, I’d like to thank Alan for all the support that he has given me since starting at Salisbury FC.

If you’d like to make the most of the hospitality at Salisbury FC and be looked after by a club legend, email ian@salisburyfc.co.uk.