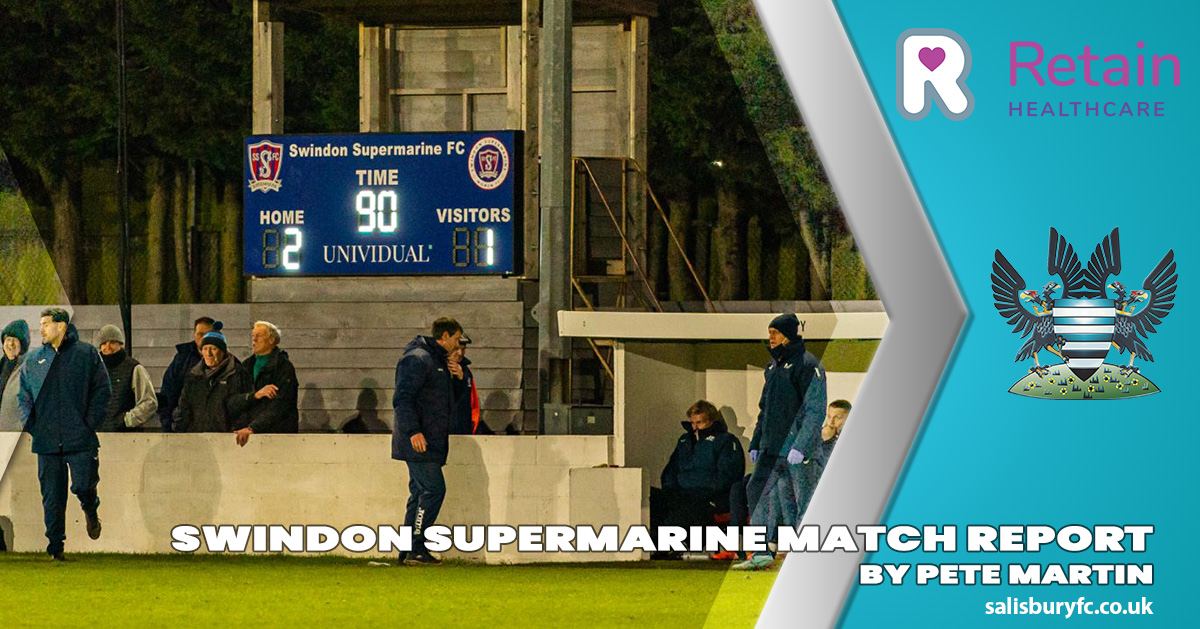 Salisbury came out 2nd best in a hard-fought Wiltshire derby at Swindon Supermarine. The Whites team showed 3 changes from the last league game against Farnborough as Sam Roberts, Josh Wakefield and Yemi Odubade came in for Charlie Kennedy, Ollie Knowles and Marvin Brooks.

A cagey opening 10 mins saw few chances and the ball spending the majority of the time in the midfield. Salisbury were the first side to threaten after 12 minutes when Antonio Diaz put a 25-yard free-kick just wide following a foul on Josh Wakefield. The home side’s first real chance came on 18 minutes when Kieran Phillips was put through on goal but Marcus Beauchamp in the Salisbury goal was equal to the task with Ryan Campbell unable to take advantage of the follow-up. Salisbury’s next opportunity saw Calvin Brooks put a dangerous looking ball across the box but no Whites player was able to apply the finishing touch. The home side made them pay for that when on 28 minutes they took the lead. Bradley Hooper found space on the right and his ball across gave an unmarked Campbell the simplest of tasks to tap home at the back post. It could have got worse 3 minutes later when a defensive slip saw Phillips through on goal but again Beauchamp was up to the task and made a good save.

This seemed to sting Salisbury into life and after a Jack Ball long-range shot went wildly over the bar the away side drew level with a goal of the highest quality. Good hold up play from Sam Ashton saw him play the ball to Charlie Davis a full 30 yards from goal. With not much on in front of him, he unleashed a rocket of a shot that arrowed into the top corner giving Martin Horsell in the home goal no chance. That ended the scoring chances in the 1st half with a level game perhaps being just about fair on the balance of play.

Any half time words from Whites’ manager Steve Claridge went straight out the window as within 30 seconds of the restart Supermarine scored what proved to be the winning goal. Henry Spalding, who had a brief spell at the Ray Mac earlier in the season, played in Phillips and he set up Harry Williams for a simple finish. This goal prompted a re-think for the Whites with Harry Baker coming on in place of Odubade and Salisbury going 2 up front. Despite this substitution, the next chance fell to Swindon and saw Spalding unable to take advantage of Lewis Hall’s ball into the back post, before another Whites change saw the returning Josh Sommerton replacing Micheal Elechi. Chances for either side were rare, although the Whites saw plenty of the ball without being able to create too many opportunities to level. Brooks was finding quite a bit of space on the right-hand side and one such time saw him cut into the box but his effort towards goal was blocked by a Supermarine defender. The closest Salisbury came to an equaliser saw Wakefield heading narrowly over from Davis’ testing free-kick before a reoccurrence of his injury saw Sommerton leave the pitch to be replaced by Devon Arnold. The home side’s final chance came on 86 minutes when Beauchamp was again sharp to block Conor McDonagh’s shot and the Whites day got even worse when in time added on Sam Roberts was shown a straight red card for a strong tackle on Hooper.

Salisbury will be disappointed to return with nothing from a game that saw them have the majority of possession, albeit a game in which they failed to test home keeper Horsell as much as they would have liked. The Whites will look to bounce back next Saturday 11th December in their final home game of the year against Yate Town. Salisbury went down to a 5-2 defeat in Somerset earlier in the season and will be aiming to avenge that when they kick off at 3 pm.