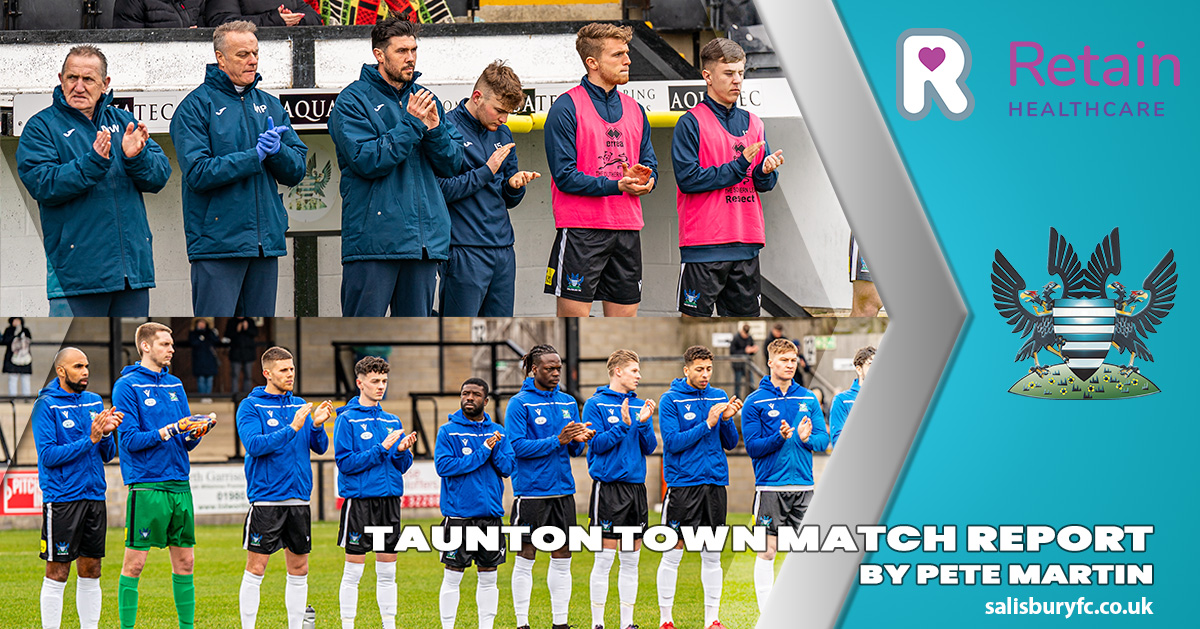 Salisbury’s inconsistent form continued as they went down to a 2-1 defeat at home to a Taunton Town side currently sitting 4th in the league. The Whites team saw 2 changes with Charlie Davis in for Lewys Twamley and Patrick O’Flaherty replacing Marcus Beauchamp in goal.

It was a cagey opening half with limited clear cut chances for either side. The first half chance of the game wasn’t until 15 mins in and saw Taunton forward Jared Lewington weakly shoot at O’Flaherty from the edge of the area. It took the home side until the 33rd minute for their first proper effort but Antonio Diaz was crowded out in the box following a good run in from the left-hand side. Towards the end of the half, both teams had excellent chances to take the lead. Firstly a Taunton free kick dropped in the area to Lewington whose snapshot smashed against the angle of post and bar with the defence able to clear the ball away from any subsequent danger, and then on the stroke of half time, Salisbury striker Josh Fawole powered a header just over the bar following a good cross in from Davis.

The 2nd half saw the same cagey start before the game exploded into life with 3 goals in an 8 minute period. The away side took the lead on 55 minutes when former Salisbury player Jake Wannell rose highest from a free kick which bounced off a combination of post and defender before going in. The Whites reply was immediate and when Diaz was bought down in the box the referee had no hesitation in pointing to the spot and despite the Taunton protests, Davis stepped up to confidently despatch the penalty and level the scores. It took Taunton only 6 minutes to regain the lead and this goal was definitely Wannell’s. A corner came in from the left and he rose unchallenged for a simple header to score what proved to be the winner. This little flurry of goals proved to be the main goalmouth activity of the game as, despite their best efforts, Salisbury were unable to test Will Buse in the Taunton goal with half chances for Darren Mullings and Devon Arnold being the best they could muster. At the other end Lewington shot wide from in the area and a Jay Foulston free kick went over but it was Salisbury who had the best chance late on when Calvin Brooks volleyed effort was deflected over and they were unable to find the equaliser they perhaps deserved.

Salisbury is back in action at home this Tuesday 8th March when they host Tiverton Town in a 7:45 pm kick off.