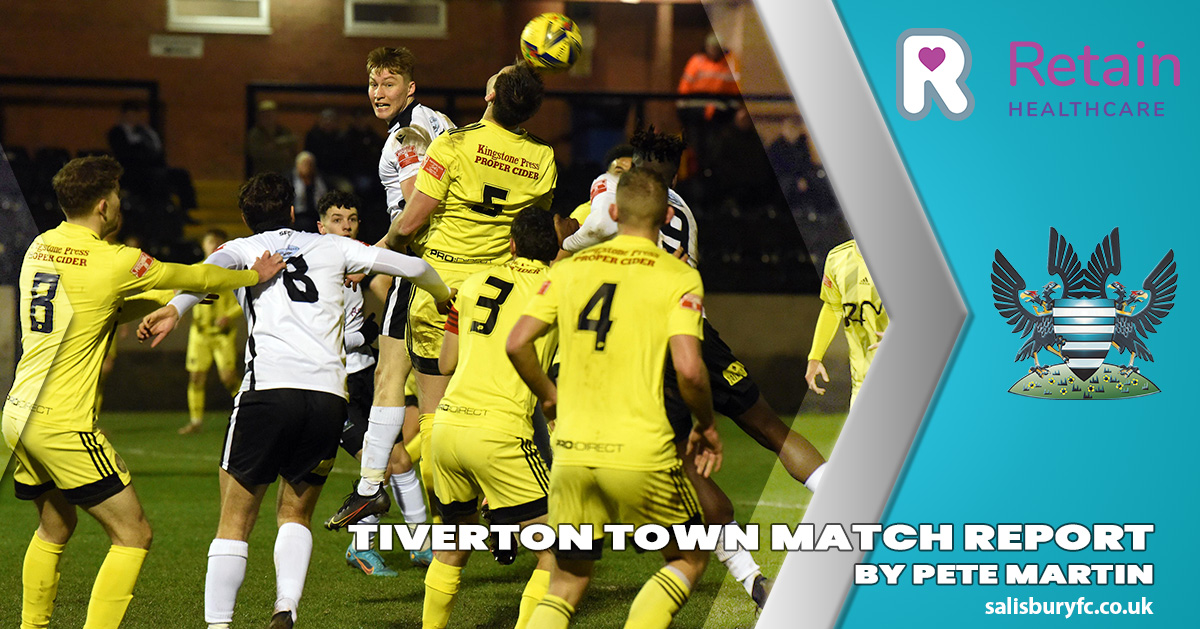 Salisbury’s poor home form continued as they went down to a 3-0 defeat to Tiverton Town at the Ray Mac. Steve Claridge made 4 changes to his side with Marcus Beauchamp, Sam Roberts, Sam Heal and Lewys Twamley all handed starts.

Tiverton could have taken the lead inside the first minute as Salisbury lost the ball in midfield which allowed Dan Hayfield to feed the ball wide to Joe Belsten but his effort was blocked and went behind for a corner. Salisbury’s first chance of the match came after 10 minutes and saw Abdulai Baggie feed the ball into Josh Fawole who saw his shot well saved by the feet of Tiverton keeper Lewis Williams. Chances were thin on the ground at either end but the away side were able to capitalise on their next opportunity and take the lead on 23 minutes. The ball was played through the middle of the Whites defence and Theo Simpson muscled his way through and, despite Beauchamp doing well to save his initial shot, the Tiverton striker followed up to put his side in front.

A very stop-start game saw few moments of penalty box quality and it wasn’t until the 40th minute that the next chance arrived. A Tiverton corner was played in low to the front post and in a well-worked move, Gary Warren put his effort narrowly over the bar. This stung the home side into life and in their best move of the match, Twamley saw his shot well saved by Williams after good interplay involving Josh Wakefield and Calvin Brooks down the right-hand side. Shortly after the half time whistle blew sending the away side in the happiest at the break.

The Whites started the second half brightly and in a quick break Baggie hit a cross-field ball to Antonio Diaz but his shot was comfortable for Williams to deal with after the winger had cut inside. As the half went on Tiverton started to gain a strong foothold in the game and they doubled their lead just after the hour mark. Louis Morrison had an effort blocked behind for a corner and despite the first corner being bundled behind the 2nd corner proved to be the undoing for Salisbury. The ball was swung in and Austen Booth had acres of space to plant his header into the net despite Beauchamp getting hands to it.

Salisbury struggled to regain a foothold in the game and could have been further behind after 72 minutes when Morrison ran from distance and tried a snapshot with Beauchamp needing to be alert to push it around the post, but 8 minutes later they could have got a goal back when Fawole headed wide from Charlie Davis’s cross. The killer 3rd goal arrived on 86 minutes and after Diaz had an effort blocked at one end Tiverton broke down the right through Simpson and his ball across gave substitute Jordan Lam the simplest of tasks to tap home from 6 yards out. The final chance of the night fell to the home side but Diaz shooting wide just about summed up the evening for a Salisbury side who have now not won at home since mid-November.

The Whites have no game this Saturday before taking to the road on Tuesday 15th March to face Truro City.