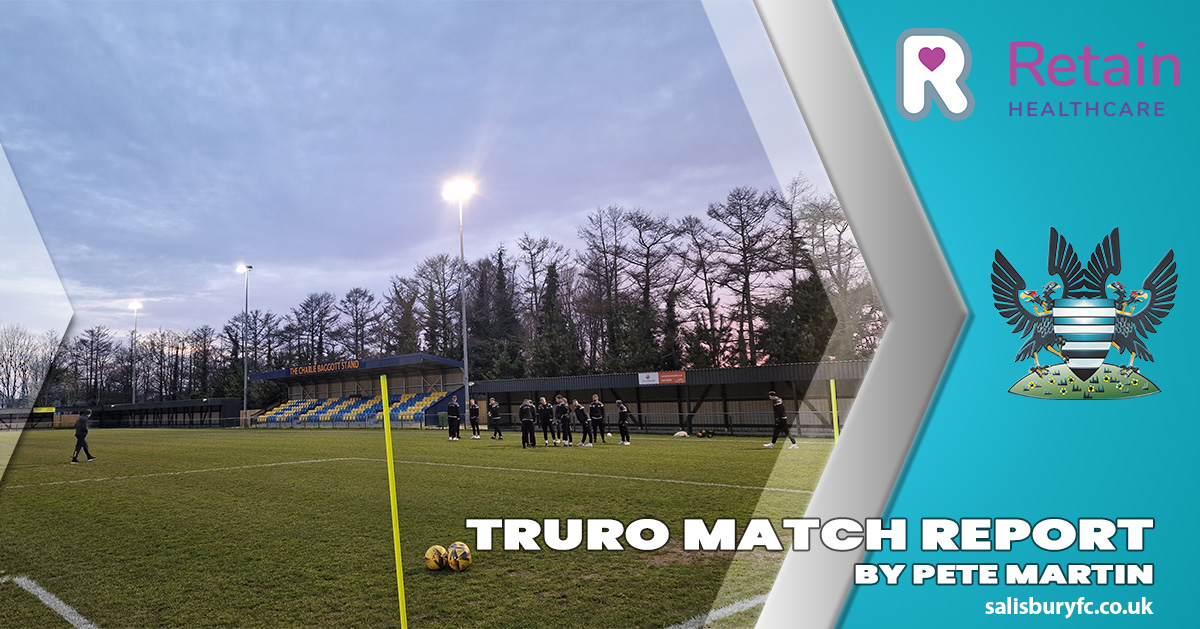 Salisbury returned from a long trip to Plymouth with 3 points secured following a hard-fought and well-deserved win against Truro City. The team showed 4 changes from last week’s defeat to Tiverton with Charlie Kennedy, Darren Mullings, Dan Fitchett and Ollie Knowles all coming into the starting lineup.

The Whites started very brightly and there were some optimistic shouts for a penalty inside 2 minutes when Fitchett felt he was bundled over in the area but referee Tim Burley was unimpressed. It took just 6 minutes though for Salisbury to open the scoring and it was Abdulai Baggie who got the goal. Fitchett did very well to win the ball when it came forward and he was able to feed it between the defence and allow Baggie to run on and finish well beyond home keeper James Hamon. Truro could have bounced back almost from the kick off but Tyler Harvey was unable to control the ball in the box and Marcus Beauchamp was able to gratefully claim the loose ball to prevent an immediate response.

Salisbury were enjoying a good spell in control and could well have doubled their lead after 17 minutes if there had been anyone gambling in the box when Calvin Brooks fired the ball across the 6-yard line. The home side were struggling to gain a foothold in the game although Beauchamp did need to be alert to keep out a long-range drive from Andrew Neal after the White’s lost the ball in midfield. They should have been further behind on 23 minutes when Fitchett somehow managed to blast the ball over from 6 yards when he found himself in acres of space in the box. 3 minutes later however Salisbury did double their advantage and it came from the boot of defender Josh Sommerton. Baggie managed to win a corner for his team and although the ball was initially cleared it found it’s way to Sommerton who curled a fine left footed shot from 25 yards into the bottom corner. That was it as far as clearcut chances went for the 1st half with Truro finding themselves unable to deal with Salisbury’s energy and pressing in the attacking areas of the pitch.

The opening 15 minutes of the 2nd half saw Truro have their best spell of the game without managing to create much to test Beauchamp. It took an error from the Salisbury keeper to let the home side back into the game after 57 minutes as his poor clearance was fed through to Neal who duly raced clear and slotted past Beauchamp to give his side hope of a comeback. The goal seemed to galvanise and re-energise Salisbury and they pushed forward again with first Antonio Diaz driving in from the left and drawing a good save from Hamon and then Charlie Davis putting 2 shots from distance over the bar. The sustained spell of pressure did bring its reward though after 69 minutes and it was through a Davis penalty that it came. Once again Diaz drove clear into the box and as he went round Hamon, the keeper could only bring him down with referee Burley showing no hesitation in pointing to the spot where Davis calmly put the ball down the middle to restore the 2 goal lead.

Once again Truro tried to hit straight back from kick off and Beauchamp needed to be very alert to keep Neal’s effort out, although there were suspicions of handball as the ball came into the box. Salisbury were far from being done in an attacking sense and substitute Sam Ashton could have scored twice in 3 minutes but he was unable to take advantage either time when well placed in the box. With 7 minutes of the game remaining, Beauchamp helped keep his side in it with 2 fine saves in succession. Firstly he was out sharply to save with his feet from an Alex Battle volley at the back post and from the subsequent corner, he made a fine save to deny the same player when he had a free header from just 6 yards out. A further chance for Ashton to add a 4th in injury time couldn’t be taken and The Whites held strong to see the game out well and take a much deserved 3 points home with them.

Salisbury are on the road again on Saturday, this time heading to London to take on Walton Casuals in a 3 pm kick off.