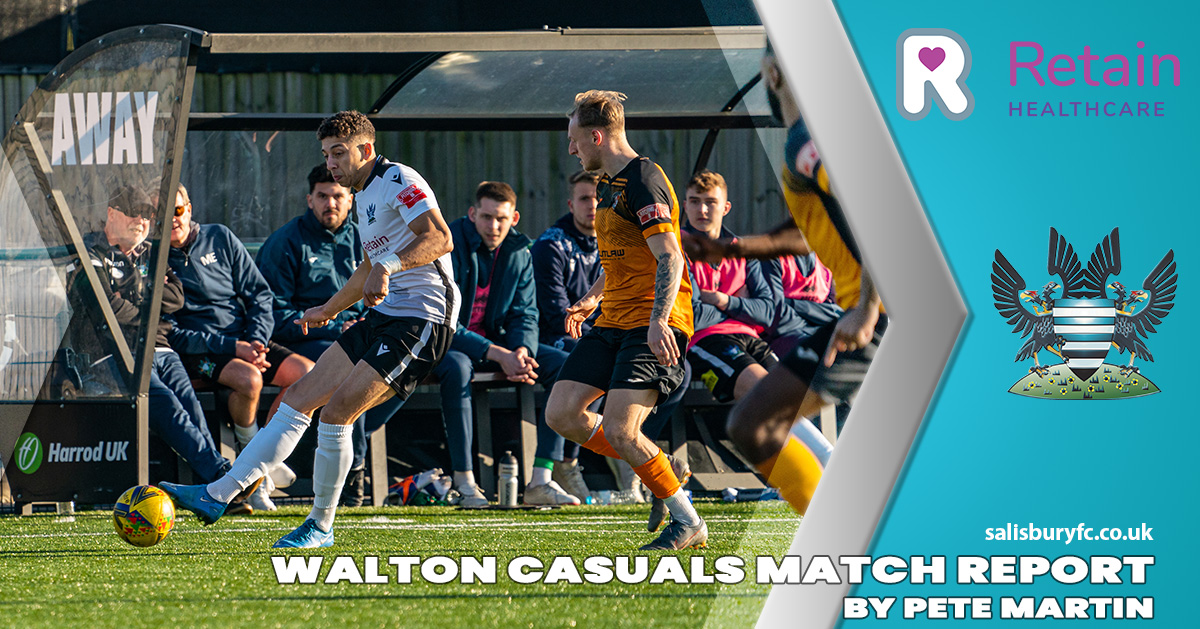 Salisbury’s inconsistent form continued as they went down to a 2-0 defeat away at Walton Casuals. The Whites manager Steve Claridge made 1 change from Tuesday’s win against Truro, Sam Heal replacing Sam Roberts in defence.

It was a cagey opening to the game and it took until 12 minutes for either team to threaten. Salisbury defender Charlie Kennedy took a quick free kick and set Calvin Brooks away down the right. His ball across found Charlie Davis on the edge of the box with his subsequent shot hitting the side netting with half the ground thinking it was in. The next Salisbury effort arrived after 21 minutes and saw good pressure from Antonio Diaz allow him to get the ball across the box where Brooks blazed an effort over when well placed. Straight away Walton responded and in their 1st real foray into the Salisbury box, Adam Liddle saw his shot well saved by Marcus Beauchamp in the Salisbury goal. That proved to be their only proper chance in the 1st half and there wasn’t much more for Salisbury to shout about either with only a Davis free kick causing slight concern for home keeper Harvey Collins before the referee blew the whistle to bring an end to the half.

The second half saw The Whites start brightly and 7 minutes into the half they came closest to opening the scoring when Collins did well to tip Davis’ effort onto the bar after good work from Diaz. As the half went on Walton were starting to get a foothold in the game and after 65 minutes they should have got the games 1st goal but Liddle couldn’t finish when well placed inside the box. 2 minutes later Beauchamp saved well from Bradley Keetch and at the other end a series of offside flags thwarted Salisbury who found themselves unable to get any sort of attacking momentum going.

Just as the game looked to be heading into injury time with a 0-0 scoreline the home side were able to break the deadlock and it saw an error from Beauchamp. An innocuous-looking ball in from the left was mishandled by the keeper and ended up in the net to the delight of the home fans. With virtually the last kick of the game, Walton sealed the win when Daniel Rowe was quickest to react following the ball coming back off the post after an effort from out wide to leave Salisbury disappointed with the afternoon’s efforts.

The Whites have a midweek trip to Melksham to face Corsham in the Wiltshire Premier Shield before returning home to tackle title-chasing Farnborough next Saturday.