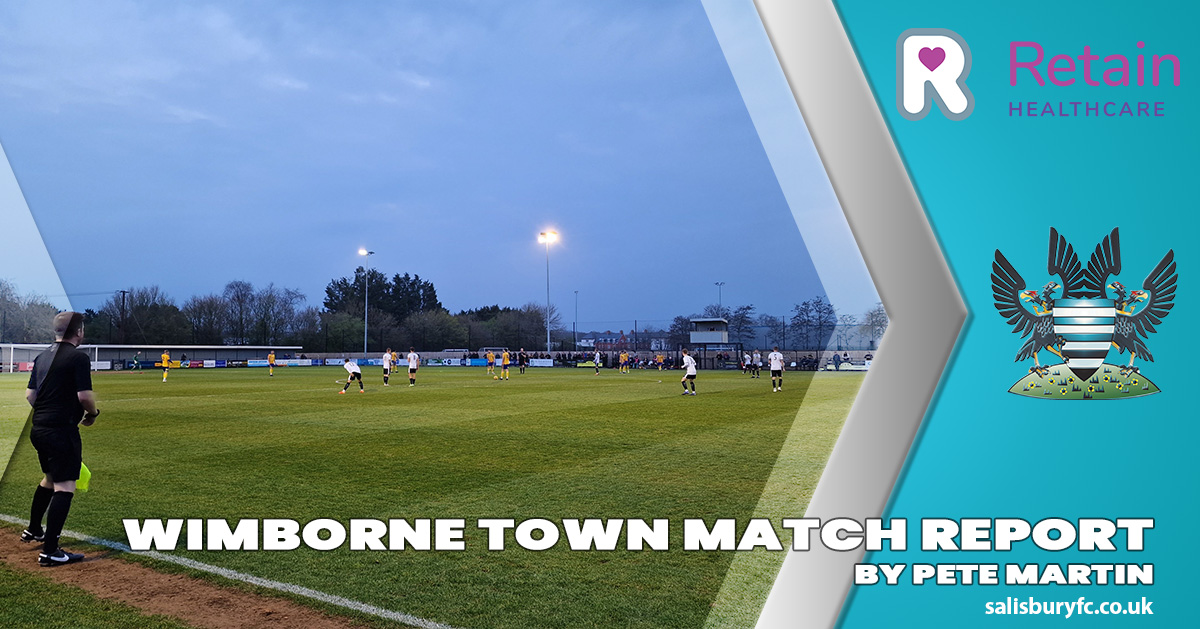 Salisbury made it 2 league wins in a row for the 1st time since September with a 1-0 victory at bottom of the table, Wimborne Town. The Whites manager Steve Claridge made 3 changes from Saturday’s win against Farnborough and included recent signing Jordan Rose for his debut.

It was after just 5 minutes that the game’s only goal arrived and it saw a fantastic strike from Charlie Davis. A fine ball over the top found Calvin Brooks in the right wing area and he drove into the box and shot goalwards only to find former Salisbury keeper Gerard Benfield equal to the task. However, the ball was only cleared as far as Davis 25 yards out and he curled it left-footed into the bottom corner. The home side attempted to bounce straight back from this early setback but from the kick off Harry Morgan could only put his shot wide from distance when in space.

The vast majority of the rest of the half was a tight battle with chances few and far between for either side. It took until the 35th minute for either team to really threaten again and Salisbury striker Dan Fitchett could only put a header wide after Calvin Brooks broke down the right. The closest the game came to a 2nd goal was 5 minutes before the break when an Antonio Diaz chip was cleared from just off the line after Benfield came well off his line to try and clear the ball following a corner. The ball was then recycled back in but saw Rose plant a powerful header past the post and wide. The only other goal threat of the half for Wimborne came just before the half time whistle but Louis Kellaway put a header wide of the goal from a corner.

The second half was a very cagey affair and only saw one save of note from either keeper. That arrived after 57 minutes and saw Benfield make a tremendous save to stop Darren Mullings from scoring in consecutive games. The ball came in toward the back post from a throw in and after Brooks won the initial header, Mullings powered his way in front of his marker and cleverly hooked it goalwards only to find the keeper up to the task to claw it away for a corner. Further half-chances from Fitchett and Rose for Salisbury and Scott Arnold for Wimborne failed to test either keeper and on a chilly Tuesday night in Dorset, it was the Whites who saw the game out for a second successive 1 nil win.

Salisbury are on the road again as they travel to Wales to face a Merthyr side who sit just 1 place above Wimborne and look mired in trouble at the bottom of the league.