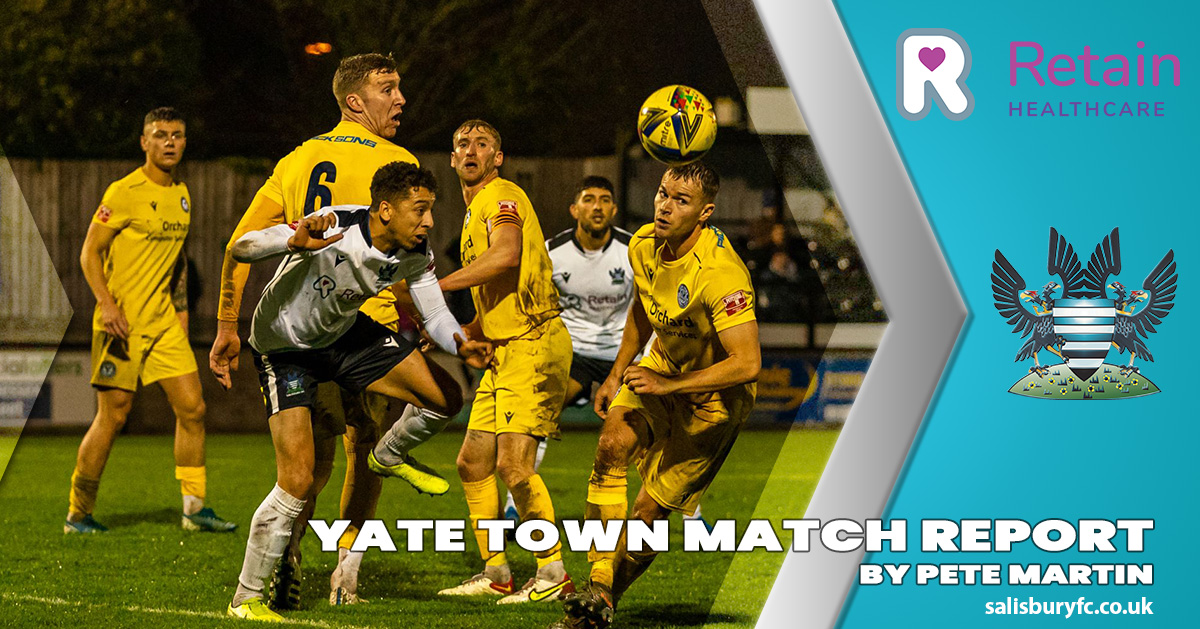 Salisbury made it three games without a win in the League as they were held to a 1-1 draw at home to Yate Town. Steve Claridge made 2 changes with Yemi Odubade being replaced by Devon Arnold and Marvin Brooks, making his return from injury, in for the suspended Sam Roberts.

Salisbury made a bright start and took the lead in just the second minute of the game. Sam Ashton’s through ball found the impressive Arnold and he finished well past keeper Daniel Bratham to register his first league goal for the club. The home side continued to play on the front foot and further chances arrived through a Calvin Brooks shot that went high and Jack Ball heading a corner narrowly over when well placed in the box. Yate’s first real attempt of note came after quarter of an hour but Sam Turl saw his shot blocked by the home defence following a good run. Salisbury had a good chance to double their lead after 25 mins when Antonio Diaz was put through but was unable to take advantage with Bratham able to get the ball behind for a corner. The next to threaten was away forward James Harding but he put his shot wide when well placed in the box.

Salisbury could have again doubled their lead on 40 minutes but Bratham saved well from Arnold when he raced clear with Charlie Davis unable to take advantage of the follow-up. The games big talking point arrived just 2 minutes later as both Salisbury’s Darren Mullins, for an alleged stamp, and Yate’s Ricardo Rees, for an alleged headbutt, were shown straight red cards following a tangle near the touchline. The home sides final chance of the half came just before the break when Michael Elechi strode forward from left-back but could only put his shot wide and they were made to pay for not taking their chances when Jamie Adams drew Yate level right before halftime. Following a break down the right-hand side, Adams was well placed on the edge of the box and gave Marcus Beauchamp no chance in the Salisbury goal to send the teams in level.

The second half saw Salisbury again on the front foot early on and after Davis shot wide from distance Arnold found himself crowded out and his shot blocked following a good run on the left. Yate’s first chances of the half came around the hour mark but both Harding and William Tunnicliff were unable to properly test Beauchamp. Salisbury were having plenty of possession without managing to create many clear cut chances and a Diaz low shot was all they were able to create until the dying moments of the game when Calvin Brooks poked his shot tamely at Bratham. In between times both Adams and Harding had shots from distance but were unable to trouble Beauchamp, and the chances for either side seemed to dry up the longer the game went on to leave a drawn game seeming almost inevitable the longer it went on.

Steve Claridge will be happy by how his side were able to control the game for the majority of the match but will rue the chances missed to put the game beyond doubt in the first half. The Whites will look to put that right next Saturday the 18th Of December when they make the journey to the south coast to take on Poole Town in what is always a lively encounter.